Glittery Numbers, or 'A Pre-Christmas Skate Against Norfolk"

Well helloooo there, 4-1 Bears win over Norfolk. Merry christmas to you too.

The game tonight was another where I felt like pure strength of will got the Bears scoring, as their passing was kinda meh and there was a lot of "Who? What? Me? Where? Puck?" going on. There would be a good series of passes every once in a while, and Cheezer was freakin' on FIRE, but there were also a lot of flubbed opportunities. Of course, there were also a lot of Admirals on their butts all night-they were having Ye Olde Slippery Ice Problem.

As this is NOT the Jay Beagle Show, I'm free to announce that he was out with an unclaimed injury, listed day to day, so I'm assuming he'll be back after the Xmas break. He did, however show up to do the jersey auction. Please excuse reflection of my shoulder, I tried, I really did. 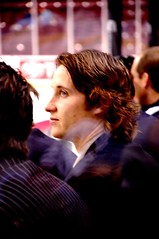 Patrick McNeill I absolutely cannot abuse anymore, as he laid down a couple of really good checks tonight and was so on top of a few pucks that squirted free that I thought he was gonna melt the ice getting there. 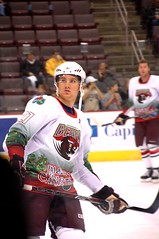 Andrew Gordon is also quickly climbing into my Top Three Favorite Bears, because he's out there kicking his own ass to stay with the action. Tonight, I saw him get creamed by two guys at once, get up, and then get right back in the battle for the puck. Also, if you want to talk about oral fixation to top even Jordan Staal, he'd be your man. At the top of the third, the Bears were taking to the ice, and Gordo lost his mouthguard coming out through the bench, tried to fumble and catch it, but ultimately had to keep going forward as to not hold the line up and come back to find it after the fact. 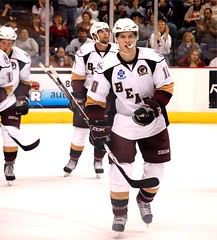 Joe Motzko, on the other hand, has made my "So what?" list. The boy DOES NOT PASS, even when there's someone amazingly open. I'm not sure if he's getting really in the zone and blacking everything else out so he's unaware, or if he's letting his nhl-callup ego get in the way, but PLEASE, Joe. PASS THE PUCK. Pass the puck or you start falling into the category of "think's he's a one man team," and we can all see from the last post how much I like that. 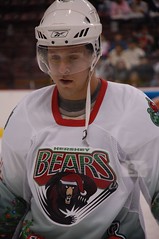 Louie was also in rare form, dancing up a storm both during the game AND afterwards, during the auction. Points to him for WINNING a fight rather definitively as well! 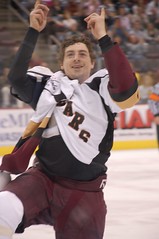 Also, mad props to Hunt, for taking a puck in the upper thigh and coming back to the game. I'd give money to see that bruise, but then again, I'm a roller derby girl. 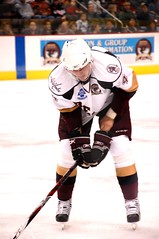 The Christmas Jersey Auction was also tonight. I'm going to go down in Bears history as "The College Student". I started bidding on Gordo's jersey, and fell out at $700 (knowing my limits, foolishly), then tried again on Patrick McNeill's, which I again got up to $700 before the MC jokingly called me out on being a plant to drive prices up. I hollerd back "I'm a college student! That's tuition!" He responded "Just think of it as an extra tuition payment!" and managed to talk me up another $50 before I gave up entirely. Of course, then, when I got a $700 bid on the Machesney jersey, the MC looked at me and said "What, all of a sudden you're not a college student anymore?" and got a laugh. It's a good thing I'm a good sport, yo. But yeah, when jerseys are going for the equivalent of a tuition payment, I might as well write them off.


I'm sorta halfheartedly wondering as well how many Bears will be on the flight I'm on tomorrow, trying to get the heck out of Hershey. We'll see. I suppose. I'll be going on week-ish-long sabbatical, as I doubt there's anywhere around my grandparents' house to get wireless internet, and it's not until the 29th I get back into the world of tech savvy Oregon. 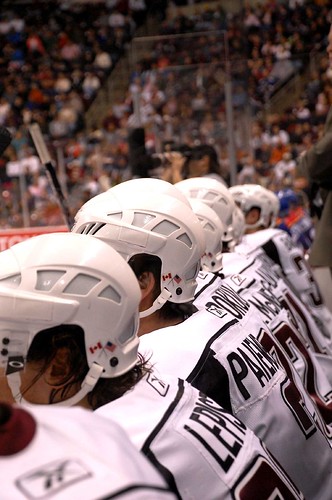 Happy holidays, hockey fans! Keep your stick on the ice!

Well, he doesn't make a HABIT of coming to games like that...get it? Habit? Habit? I'm hysterical, I know.