Well, no immediate RBK acknowledgement of the female of the hockey watching species, at least as far as the NHL.COM shop knows.
On the other hand, I am learning for $26 on Ebay whether or not a 5'4" girl with BOOBS can fit in a youth XL Canucks jersey. Moment of truth to be announced. If I can,you can bet the next thing I ask for for any large present giving holiday is a youth XL Pens jersey.

Or possibly the Swarovski Crystal shirt, because damn, don't you know I need bling to go with my bloody boys?

HOUSTON, WE HAVE HOCKEY!!

Army's got his offer to stay in Pittsburgh so I can breath again.

As do Ryan Whitney, Erik Christensen, Maxime Talbot, Ryan Lannon and Tim Brent. No word yet on what the Malone deal is, as I've been hearing all sorts of "GET RID OF HIM" crap.

Oullet's being let go, as is Andrew Penner. Penner who? And as for Oullet, he seems to stand around looking up more than the rest.

Supposedly they're even doing a pre-baby pens conditioning camp in Pittsburgh at some point in the near future. I was debating driving it, but figured that I'd wait until the big boys were in the house to justify the 3 hour drive. A girl's gotta have someone in her age range to stalk... right?


(edit. I have now coined the term "Bryzlets" for the Bryzgalov children. Unfortunately, it does make them sound slightly like a cut of meat.)

Labels: all them there hockey types, anaheim ducks, goalies

Sidney Crosby is as big a history dork as I am. (okay, possibly, not quite as big, but definately working on it. HE HAS HISTORY 6TH SENSE. I AM NOT INSANE AND MAKING IT UP. SEE? SEE?)

Perhaps there is hope for me in Canadia.

(And seriously, Sid has total boycrush on Army. FOR REALZ.)

My hopes for the upcoming NHL jersey release.

I am hoping, seriously hoping against hope that with the release of the new RBK Edge jerseys, we'll get women's cut jerseys that look like.... well... REAL TEAM JERSEYS. RBK managed to figure it out for the All Star teams so I can only hope they'll not throw away that effort when it comes to making the jerseys for the individual teams.

Because frankly, those pink and white pieces of crap piss me off. My team's colors aren't pink and white. Of the two teams that I really follow, the closet you get to pink is the red in the bottom of the Canuck C, and I think you might be attacked by a rabid Sedin if you tried to push that too far.

Seriously, making "women's cut" jerseys predominantly in 'baby girl' colors (there are a couple of teams that figured it out... see the Blues.)is almost insulting. It implies that women aren't into the game enough to want to wear a "real" jersey and all we want to be is fashion plates.... albeit in pink and white.

Yeah, you can argue that a real fan wouldn't want to wear a women's-cut jersey because it's not OMGEXACTLY WHAT THE TEAM WEARS, but that's because a women's cut jersey wouldn't fit the majority of the team. Similarly, a men's cut jersey doesn't fit my girly body. Oh sure, it goes on, but even in a men's small, I haul around a small dresses' worth of excess fabric.

I don't even look GOOD in pink and white.

I'll be waiting to buy a new jersey until the new jersey release. Hopefully they'll figure it out after that.

This is why we should not let Army do interviews. EVAR.
Although I do like the idea that Tim Horton's bought Crosby a dragon to guard the Lemeaux house.

Tidbit of the Day:

As for the awards show....
The NHL sure thought these started at 7, and VS sure seemed to think that they were airing them at 7:30. It's now 8, and we're STILL WATCHING KICKBOXING. I've been on hold with V.S. for about 10 minutes, and it's getting pretty obvious that we'll probably not be seeing it until at least 11 PM, if then.

Why does V.S. shoot themselves in the ass like this? They've got a whole bunch of irate hockey fans calling in, that's why ALL CIRCUITS ARE BUSY. You don't just scrub a show because you feel like showing kickboxing instead. That's how you lose people.

It's time the NHL just ponied up and made their own network or something. That's gonna be the only way the average everyday hockey fan (without the money for center ice) can watch games soon, if this keeps going where it seems to be going.

I was at roller derby, getting all sweaty and gross.

I'm so amused, because all of the young guys like Staal and Crosby look like they're missing their prom dates. Or if you want to get really funny, their frat formal dates. At least they're not Vinny Lecavalier and his gold-wrapped floozy, guaranteed to stay fresh all night. (oh, that was crude.)

And can a girl get some sponsorship for the "Get Crosby a Hair-DO" (not a don't?) fund? I understand you're rocking the unconcerned teenage hockey star look right now, (which seems to be a cousin of the high school water polo boy look), but we really, REALLY need to take you through Gel 101 again, because you can't ALWAYS LOOK LIKE YOU"RE DRIPPING WET. Because if you look that way, people will assume you're dripping wet. Ratings will plummet. You'll be the next Michael Phelps getting pulled over for DUI. So please, just a few dollars to get Sidney's hair did? At least for big, high profile events?

I rest my case.


(cross posted at One Pen, Two Ducks as well... .where you can also find the West Coast version.)

Labels: all them there hockey types, sid the kid

I hate the offseason.

Because in the offseason, all you have is Youtube, and as many hockey fights as you can watch at once before they all start looking the same.
However, YouTube has helped me begin my "Bears Players to Cheer For" list after I found a clutch of AHL fights. So far Kip Brennan, Man Who Can't Stay On A Team is in the running, mostly for his ability to punch a Manchester fan THROUGH THE PENALTY BOX.
I might be easy to buy with a good fight, but MAN, that's still impressive.

And the steam runs out. The Hamilton Bulldogs are the 2007 Calder Cup champions. Which means that I have to wait an entire off-season to watch live hockey.

And when I stay tragic, I mean on-par-with-battlestar-galactica-seasons-starting-in-january tragic. And I cried a little for that.

On the other hand, the Hershey Bear sweatshirt I had my eye on anyway is now discounted. Heh. Oh, life in teh cheap lane!

Ducks for the win!

I'm happy to see a Western team take it. I'm also happy to see the Sens get their metaphoric butts handed to them, but I'm fully aware that that feeling is still residual from their stomping of the Pens.

In other news, Build a Bear Workshop really DOES have a little Pens uniform. I need that... as i think it'll fit on one of my many stuffed moose.

Panic! at the hockey rink.

..or lack thereof, more accurately. As of oh, two days agoish the Pens posted the first of their 'summer series' interviews.

Phew. Looks like they're gonna keep him. Now I can NOT have to disown the Pens for the Flyers as a Pennsylvanian. I mean, I could always fall back on the Canucks, but there's only so much Sedin I can take at once. (Has anyone else noticed that Henrik seems to be the 'evil' twin? Seriously, go check out the Canucks roster page.) And i don't know if I could take Luongo's angst for an entire season, the drama queen.


Of course, come the regular season, there are a whole host of teams I haven't even SEEN play yet, so I may wind up being a Pens/Someone fan instead of a PENS/(canucksducks)fan.

Back to your regularly scheduled whatever.

Don Cherry's cameo in "The Wild" is rather hilarious.... of course, he's not on screen very long, but still worth seeing. I don't think they really let him get ripping, because he seemed pretty dang subdued for most of it. They probably made him stay on script pretty closely.... not that that really stopped him before.

And his character's a pengin.

No, no hockey symbolism in there at all.

Granted, I was stuck on an airplane and didn't ACTUALLY see it, but the replay I saw didn't convince me that it was an elbow to the head. It looked to me more like Pronger actually hit McAmmond with his shoulder, and stepped into the hit.
While I don't completely buy the 6'6" vs. 5'11" argument, I CAN see how if it was an elbow, Pronger might have been reacting completely on instinct. If a dude's coming by you, your instinct is gonna be to stop him with whatever's closest. I should know.. I still attempt to widen myself in derby by throwing elbows, as illegal as it may be. I know it's illegal, but dayum, I don't want that other person going by!

Hopefully I'll acquire a TV and be able to WATCH the game tomorrow.

The upcoming draft has my knickers sort of in a twist, because after the draft, dudes start shuffling. I'm fully aware of the fact that Malkin and Staal and Crosby are staying in Pittsburgh, (duh), but I'm apprehensive about Armstrong. I'm glad that he seems to be starting a record of "score under pressure" because it makes him look good to thems with the money, but I don't know if he started working on that early enough.
I feel like the Pens would be ridiculous to let him wander off into the hockey ether, because if Crosby holds the team together, I feel like it's Armstrong who helps to hold Crosby together, and not in a slashy way either. On any team, you've gotta have the goofball, because without the human pressure valve, teams start imploding. (I give you half the teams I've ever been on.... they get too serious and too focused and too wrapped up in the outcomes to remember that they should be having fun. If you're getting paid 3 million dollars to play HOCKEY, for the love of god, have fun with it.)

Lemeaux, get your head out of Crosbyland for a minute, and make Army sign the goshdarned piece of paper. Because really, someone's gotta keep your new captain from OD'ing on Friends in the hotel room. 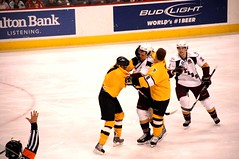