Dean Arsene's on the ice, starting for the Bears in Albany tonight.

And John Walton is my new personal hero for making a Bill Nye the Science Guy reference during the Albany broadcast tonight.

Edit:
And to that injury update, add one Sidney Crosby. 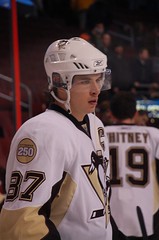 When the Bears radio network will announce he's hurt, it's a big deal. From what I can put together, it was an inadvertant two-footed trip into the boards on his butt, and he immediately grabbed at his right leg, then had to be helped off the ice.EmptyNetters (who was there liveblogging) has heard it's a high ankle sprain. Perhaps time to re-look at that whole ankle/skate relationship there, Penguins.