Here's a halfassed promise that I'll spit out Essential Hockey And Heels Moments as they happen as there were a heck of a lot of things all going on at once. However, the quick rundown, as follows. We were split into four groups, talking with Boudreau (the Chalk Talk), the wives (Steckel, Laing, Boudreau) the on-ice (Laing, Lepisto) and the locker room "tour" with the equipment manager. Overall, it was interesting simply to see how different fans interacted with players, as well as what kind of spread age/experience/knowledge wise there was. I managed to find one other Bears person on the Metro platform on the way home, and met three other "singles" I hung out with for the majority of the night. Eric Fehr (horrible picture alert) was amused by the Bears jersey, and we had a brief conversation on how Gordon was doing. I'm sure little bits and pieces of this'll show up in other posts as well, but for now I'm rather brain-dead, so have some pictures instead. 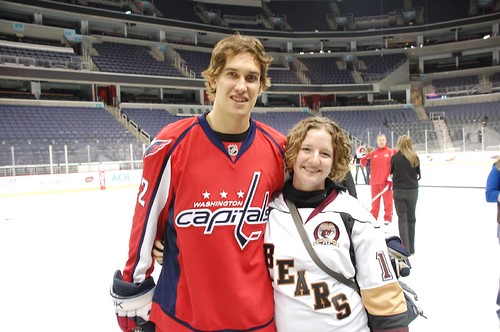 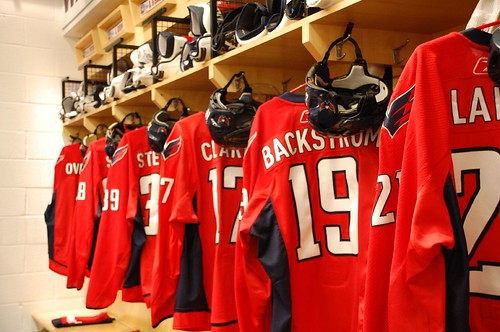 Also, for those of you wondering, the locker room was not as bad smelling as this. That'd be derby pads in the wash, 6 months out from last wash. I swear, derby girls and hockey boys, together we'd be a force to be reckoned with. Come the zombie apocalypse, I know who I'm sticking with.