Thanks in advance,
Teka.

This was, in short, a very painful game for everyone not named Andrew Gordon. As I said to Caps Chick, this game was made of fail unless you were Andrew Gordon, because he almost had the entire Pirates bench fooled into believing that it didn't REALLY take 20+ people to make up a team. 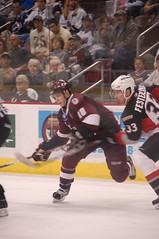 This jersey, it's like magic, I tell you. Second time I've worn it, second AHL hat trick for Gordo. Pretty soon here, I'm going to have to start charging to wear this thing. If anyone has a picture of his second goal celebration with the leg up double fist pump, I'd love a copy. I was sitting behind the goal on that one, and it's murderously hard to get that angle. I did, however, get a virtual lapful of Beagle and Gordon celebrating, which, if I can let the inner girl out for a minute, was so incredibly excitably adorable on so many different levels that I almost said "Awwwwww." But I didn't. IMPORTANT NOTE. BUT I DIDN'T. 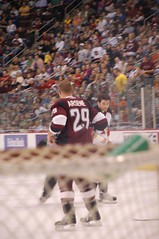 Deano had a good fight I am handily giving him the win in even though he was wrestled to the ground. Clymer stepped up and punched a guy off of Beagle's back at one point, and Louie, well, just isn't Louie unless he goes after a dude. Here's hoping that Kayden Michael Robitaille makes it through grade school before starting to take after his father. (Kid is a cutie, though. They showed him to us on the jumbotron tonight.)

Other randomly noticed things:
Beagle had a bad case of Tampon Nose halfway through the first. I'm not sure when he got hit, but I'm guessing he wasn't just doing it because it felt cool. He's also got a fan club up in the 200 section that's new, for "Beagle's Dog Pound." It looks like Beagle's finally starting to get himself back together after the concussion, as he's looking faster and more on top of stuff again. 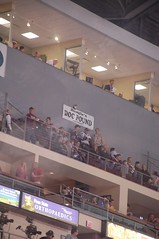 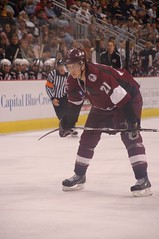 Is she talking about me AGAIN?


McAllister, still not impressive for a guy of that size. I really want him to be in there all over the place being intimidating and throwing himself around, but a Bourque-sized Pirate shoved him out of the way and ran by tonight. 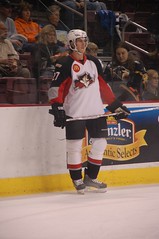 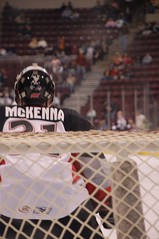 Replacement Pirate goalie Mike McKenna also um... well, yarked all over the ice tonight. Guess he wasn't feeling too good, but I can't imagine trying to get vomit-smell out of a goalie mask. I don't envy that equipment guy.

I don't know if I'm allowed to admit this here, but I'm also confirmed as a participant in the Caps' "Hockey and Heels" event on the 25th. I'm really doing it as thesis research, but hey, if I can have some fun with it at the same time, why the heck not? If anyone else is going to be there. lemme know.


Also, finally, to end with A Completely Selfish THTM Request.
If anyone out there reading this has the wherewithal to get me one of the Caps "Young Guns" posters, I'm willing to... well... negotiate, probably in the form of baked goods or knitwear, possibly photography. It doesn't even have to be signed, just the poster will do.

Ew He YARKED? Yick. When? How did i miss that? Gross. Shades of Neil Little I suppose.

I heart Andrew Gordon. He reminds me of my dog...just happy to be there.

I was singing the Pirates who don't do anything song to myself...until they started scoring the goals. Damn them. I'm sorry I showed up to this game...I should have left after Gordo scored the ole hat trick. I just want to take that man and hug and squeeze him. Think he'd mind?

I have decided I hate McAllister. He's so SLOW. He must be on drugs.

Deano and Clymer impressed me last night. I also gave the win to Dean in his fight. Even with the takedown. He threw the most punches and connected the most.

Oh, trust me, you have to get in line for the Andrew Gordon Hugging Party. I don't think the line's quite as long as the one for the Puckbunnies Love Jay Beagle Party yet, but it's getting there.

I don't understand the Dog Pounds appeal. But then I don't long hair on guys.
I felt that way about Rick Berry...I wanted to jump him the moment he got his hair cut. I didn't-but I did end up with his head in my lap. Long story.