Overall, that was a highly disappointing game. The Sidney Crosby Show has a good recap over there game-penalty-points-wise.

What I was most taken with was how fast the NHL game moves compared to the AHL, but how SLOWLY everyone was reacting. The Penguins were there and playing, but I feel like they were completely unmotivated until the last part of the 3rd, when everybody just wanted to start fights. I’m not jumping on the Fire Lord T. bandwagon just yet, but I’m starting to watch its’ progress across Pensville. I know that the team has to bring its’ own motivation to the game, but honestly, a coach has to know how to get it out of them when it’s needed. As a team sport player, I’ve been collectively bullied, coerced, virtually bribed… I’ve played under quite a few coaches, and the ones who could figure out how to get the team going again were the ones who could turn games like that around.

Anyway.
I was heart-warmed by how much Crosby actually made himself a human being for me playing live. I’m one to call him a our spokes-robot as much as the next person (what good’s a team if you can’t mock them?) but I have to say that I’m really quite firmly on the pro-Sid side now. (Elly can breathe a sigh of relief). I distinctly lip-read “EFF YOU, MOTHER EFFERS” while he was jawing at someone from behind the Flyers’ goal, and watching him attempt to agitate a Flyer into fighting him was great….until Malone stepped in and reminded him he couldn’t do that.

The Flyers fans really tolerated me down their in their goal-section better than I thought they were going to, with the exception of a few people. My general response to anything anti-Pens was to yell “SO’S YOUR MOM” at the top of my lungs, and the people around me seemed to be amused by it, for the most part. 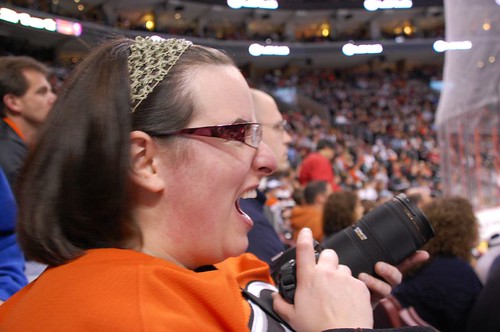 However, the Crappy Flyers Fan of the night went to the fuckhead (pardon my French) in the women’s bathroom. It was the end of the game. My team has just lost. Kristin and I are standing in line, me in my Army jersey, and this short little twat in a Flyers jersey comes past me and quite obviously shoulder checks me. I turn around to her, and mostly jokingly say “Hey… do you wanna go?” and she, well I have no idea what she said, but it wasn’t complimentary, and somewhere in there were the words “Pens bitch”. Seriously, there was almost a throwdown in the womens’ bathroom at the Wachovia center, and I have no doubts that had I actually thrown down, I would have easily taken that girl.

Of course, then I was hyped up on righteous indignation for the rest of the damn night.

I don’t understand what possesses people to do crap like that. I obviously wasn’t talking that much smack about her team, I was accepting my loss, I was waiting to pee, for Christssake, and to come in and check me? I think I’m still going to be riding that fury through our roller derby bout today. Everyone is going to have that girl’s face painted on their helmets, as far as I’m concerned.