I’m sort of shuffling up the NaBloPoMo schedule, and doing a modified “How Do I Look” today.

I give you “Issues with the Edge.” 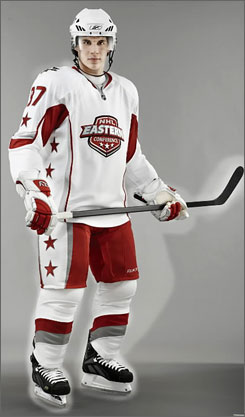 Anyone who hasn’t been under a rock since the season began has heard that the big boys in the NHL aren’t quite pleased with the new RBK Edge system jerseys. Some are whining that they’re too tight and get restrictive and others are complaining that they’ve been dripping sweat into their gloves and skates at a ridiculous rate… simple fabric physics says that if the fabric repels moisture on both sides, sure, ice chips aren’t going to melt into the outside and add water weight, but the sweat from the inside is going to STAY INSIDE.

As Mark Recchi said “[The sweaters] don’t soak anything in, which I guess is what they wanted, but the problem is, it goes through all of your equipment. It goes into your gloves, goes into your skates.”

And I’m hypothesizing that the NHLers aren’t the only ones having issues with their gear. The AHL went over to the Edge system at the beginning of this season as well, and at least as far as the Bears go (I’ve only really been watching them) I’m seeing the telltale signs of the same issues. The burgundy numbers on the back of the uniform start getting gradiated in color due to sweat-wetness soaking into them. We have, in Hershey, at least two pants-slitters in Beagle and McAllister, and I’ve watched Beagle take his gloves off and attempt to wipe his hands either on the jersey or on the shirt UNDER his jersey in ever home game I’ve been to at this point.


Granted, he may have done this all the way through his career, but it seems fishy to me that in the first few games he’s trying to wipe his hand on the jersey, and in the latter few, he’s going for the underarmour… that seems to imply to me that he’s realized he’s not actually getting anything off his soggy hands on the water-resistant fabric.

And as far as the pants slitting goes, I’m still working on the hypothesis that it’s in response to the tighter Edge pants. Beagle and Wilson and McAllister are wearing those, torn up, while Lepisto is wearing the old school CCM pants, all in one piece. I do also partially wonder if it’s a Capitals trend to rough your pants up, as Nylander was showing an awful lot of Rbk Edge-induced thigh during training camp.

Someday, I’ll get to ask someone, but as of now, I think it’s safe to assume that the AHLers are having as wretched a time with the Edge as the big boys.