Didn’t make the hockey game tonight. I seem to have an unfailing ability to go to the lame one every weekend, as I hear this 6-4 romp over Norfolk was something to see, whereas the 2-1 shootout loss last night to the Pengins was about as much fun to watch as uh, a not fun thing. 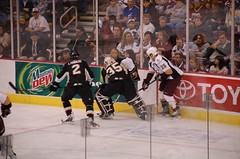 Of course, I also had to work tonight and wound up with a a migraine, so it was in my best interest not to go, but doesn’t mean I’m not still pissed.

In other news, Jakub Klepis has finally made good on the stuff we’d been hearing about not being happy in Hershey, and is going back to play in Europe, and Laing was back in the lineup tonight from D.C. I know we didn’t leave him down there quite long enough for ALL of DC to decide they love him as much as the Hersheyites do, but he’s our captain, and we’re taking him back.

Breaking news also has Boumedienne out for an indefinite amount of time with a broken wrist. I remember watching him come off the bench last night and thinking “He doesn’t look so good” but I could have SWORN that it was a leg thing and not an arm thing. Obviously, my powers of watching people are failing. Blessed freakin’ migraine.

(And in the Definitely Not The Jay Beagle Show post of the day, two goals and an assist? First star? And people laughed when we called you Little Sid. But can you start doing that nights that I actually go SEE the game, too? Kthks.) 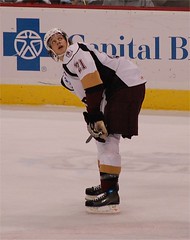 Also, Bears, can we have a discussion about these kneeing calls you keep getting? KNEEING? That’s a mite undignified, don’tcha think?