I have two words for you: shootouts BITE.

As you may have guessed, Albany took the Bears in the shootout. Which was crap. Which is why I’ve decided to focus on the players today more than the game. (Okay, also because I was in the second row next to the bench and got some killer pictures)

Tonight was “Teddy Bear Toss Night,” so after the first Bears goal, the entire arena erupted in 4,000 some flying teddy bears.

Ben Clymer was not so amused. However, later, something dumb he did really amused him, and we got the rare Non Deer In Headlights picture of him smiling.

Patrick McNeill, I take it back. Last night, you did significantly better at not standing and watching the game. Lepisto must be rubbing off on you. Thank you for bringing the hustle, as now I don’t have to cringe in fear every time the puck gets near you. We still have to work a little on that whole ‘what to do during the power play’ thing, as you turn into a one-trick-pony a little then, but I’m sure you’ll get there. 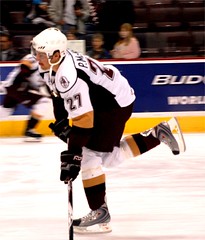 Also, thank you Andrew Gordon and Sasha Pokulok for gossiping and being ridiculously goofy during the entirety of warm ups. 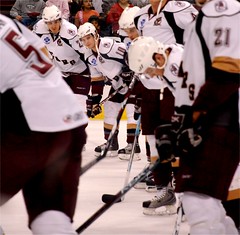 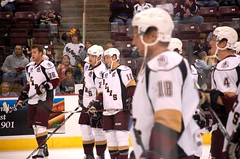 If you spent half the time working on shootout skills that you did yakking at each other like old ladies at the hair salon….. But you’re spunky, so I’ll forgive you two, grudgingly, this time.

Gordo of course then went and spread the jollity other places, like with Patrick McNeill, after McNeill took a puck from Louie in the nuts while warming Cheezer up. For someone who’s just taken a puck in the soft bits, he looks more amused about it than you think he might.

I’m really glad that Gordon’s back, as he always just looks like he’s having the best time of his life on the ice. 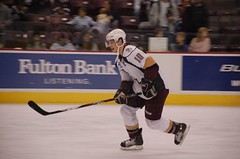 I swear his internal monologue is running something along the lines of “Hey! I’m on the ice! This is great! Man! I could do this all day! Oh, wow! I get the PUCK?! How sweet is this!? You guys are so awesome! This is so cool!”

Everyone else, who started the memo about it being “Gaping Mouth Night” on the Bears bench?

It’s not so flattering. 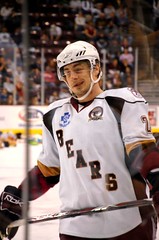 Ow, Louie. Just… ow. Of course, in here you can see that he did, in fact, lose bits of tooth taking a Phantom stick in the face on Saturday.

And just so we don’t end on that, please appreciate the Majestic Cassivi for a moment. They interviewed him last night-for whatever reason I hadn’t put together that he was from Quebec, so the accent threw me a little. 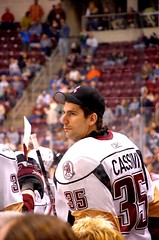