One of these days I’m going to get the Flikr resizing/color correcting down to a fast art. Until then, I’ll keep posting game recaps at 2 AM.

Tonight’s game, (the only home game against the brand new Avs affiliated Lake Erie Monsters) will go down in THTM history as being the night of the Andrew Gordon Show. I take at least some of the responsibility of how heavy it came down, as I walked into the arena in the blank Hershey jersey saying to the Hockey Gods “I’m thinking I’m gonna go with Gordo over Beagle, but if you felt like giving me a nudge one direction or the other, that’d be fine.” It started out with Motzko hooking him in the jersey and throwing him off during warmups, which he took in stride and laughed off, and then….

Andrew Gordon gets a hat trick AND is the first star of the game. When the hockey gods talk, they talk LOUD, man. 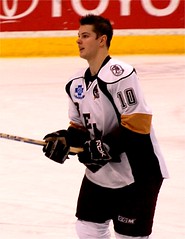 Tonight also saw Lepisto slam in his first of the season and show off his goal dance (which regretfully I didn’t get on film, but here’s him waving as third star.) 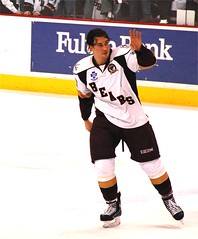 Ben Clymer took a Monster in the gut tonight, when someone literally grabbed him between the legs and over the shoulders and WWF-style picked him up and slammed him into the ice. His face looked a little raw after that, but he was still out there for the entire game. 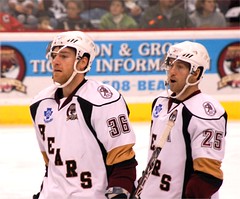 He seems to me be sort of a waning star at this point. I know that Caps Chick will flay me alive for saying it, but he hasn’t been putting up the consistent magnificence some of the younger guys are starting to be able to pull out. For leadership and position-flexibility and throwing his body around, yes, dammit, keep him, but I don’t think he’s going to end the season (if he ends it here) as a big scorer

Louie was back in the lineup tonight, looking a little battered but not too much worse for wear. However, whatever Love of the Monsters said to him to get him going five minutes into the first REALLY got him going. Instead of a happy-funny Louie fight where he goads someone into it and then dances his way to the box, this was scary-real, and you could see Louie steaming for the better part of his 5 minute timeout after trying to rip Love’s head off. 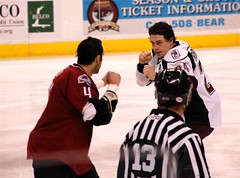 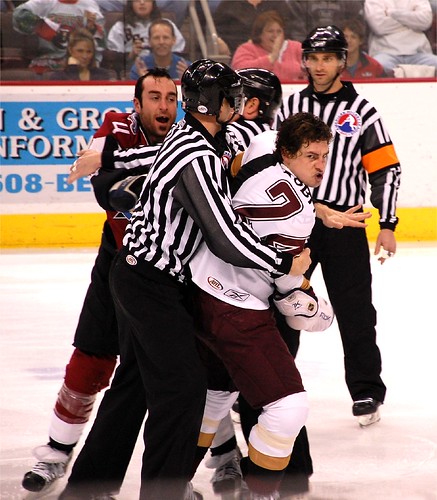 I saw them exchange words during the warmups, but Louie seemed to be joking around with a big smile on his face, so I’m unsure if that lead to this or if it was previous bad blood or what. Part of me thinks Love might have said something about Louie’s uh… run in with the cops in the last week.

Speaking of words, it was also the night to accidentally swear in front of the 10,000 people in the stands. In his first-period interview, Boumedienne accused Deano in the press box of “giving him shit” about his English when he couldn’t find the word he wanted, and at some point in the 3rd, Cheezer was less than happy with something and let out an emphatically loud “FUCK… FUCK!” I may be forced to take back what I said about him being a more even-tempered Kolzig type, as I’d not have been surprised to see him turn around and break a stick over the goalpost then.

The Monsters are also the proud owner of one Matt Hussey, former drag-wearing WBS Penguin. Poor guy hasn’t yet made it to the big show, but I’ll be darned if he doesn’t look exactly the same as he did in the 2002/2003 season… okay, with a little less glass reflection it’d be easier to tell, but I sit where they tell me too.

Tonight I also found a task for the area’s resident goalie dork, when he gets to it. Why on earth did the Monsters’ backup goalie Wall have black electrical tape all over his helmet, and what was on it that he was trying to cover?

Anyway, 6-8 weeks, and I’ll have to give y’all a shot of my hat-trick worthy Gordon jersey. Hopefully, it’ll be in before spring break, so I can take it with me down to DC, as I have no real Caps gear at this point. Speaking of which, I realized today that eventually the Caps may run into a Gordon problem…. I really hope they solve it with first initials, because for some reason having an A. Gordon and a B. Gordon running around on the ice would make me laugh so hard…. 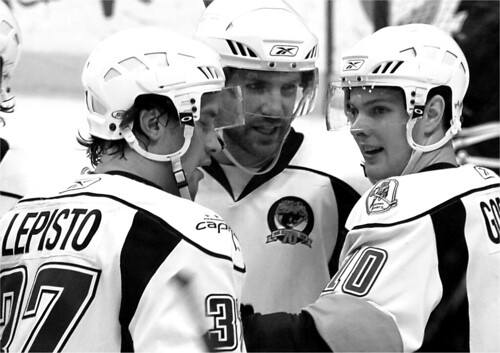