Back to your normally scheduled THTM.

Here, the Friday Injury update for the three teams and few random players I care about:

Marc-Andre Fleury: Still not playing. Still not amused. Says that it’s looking more like the 8 half of 6-8 weeks, according to trainers. By the way, if you were as boggled by the concept of “high ankle sprain” as I was, here’s a link that explains the different. Turns out it’s not just a ligament injury, but a ReallyBigImportantLigament injury.

Mad Max Talbot: Sorta got lost in the shuffle between Gordon hat tricks and Malkin hat tricks and all of that, but the Maxinator is back on the ice and playing. (which means I had to shuffle all of my silly fantasy players again to accommodate him, dammit, Max.) There’s a good indication that the fu-man-chu is making a comeback as well… or he’s got the weirdest beard growth pattern I’ve ever seen. (and yes, that’s an atrocious picture of Max, but it was that or the worse one. um… at least the logo’s in focus?)

Chris Clark: He’s back! He’s not! He’s out again with a groin issue! As far as I can find, he’s still out. May CapsChick flay me alive if I’ve got it wrong.

Michael Nylander: Per Tarik El-Bashir, surgery on his torn rotator cuff at the Cleveland Clinic was successful and he’ll be out of the lineup for 3-6 months. By, Nyles. We’ll see you next season.
Dean Arsene: Projected to play in Albany tonight, after nearly 8 months of rehab for a messed up hernia surgery. The Bears could use the help back in Bluelinerville, as poor Ben Clymer’s been back there moonlighting for a while. 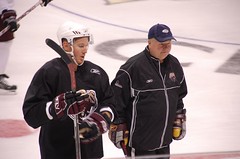 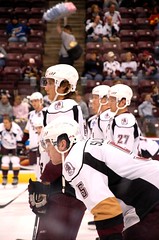 Jay Beagle: As of Wednesday, was practicing in a non-injured jersey, and seemed to be mostly back up to speed. Wouldn’t be surprised to see, well, okay, hear him playing tonight, but I’m also not holding my breath for it. Make sure his head’s okay before throwing him to the wolves, mmkay, trainers?
Tyler Sloan: Was wandering around on Wednesday in street clothes, so I’m not holding my breath. 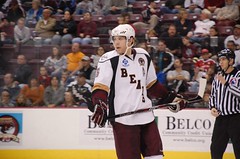 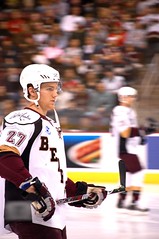 Patrick McNeill: Re-injured shoulder last weekend, and I’m not sure whether he was one of the injured jerseys on Wednesday or not. Supposedly, he healed fast last time, so we can hope that a week will see him back up to speed this time too.
Sean Collins: Still out with concussion issues. I’m pretty sure he was an injury jersey on Wednesday, so I’m not expecting to see him. (and really, I have NO pictures of Collins? Surprising.) 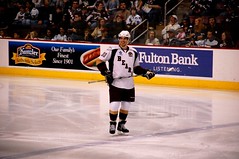 Josef Boumedienne: Wrist’s all healed, and he was in the lineup last weekend. Welcome back, Boomer! (Yet another that got lost in the multiple hat-trick shuffle. Oops!)

And randomly:
Taylor Pyatt:After taking a puck to the mouth, having his front teeth splinted and 25 stitches put in his lip from the inside to the outside, he showed up on the ice Thursday waring a face cage and not smiling much. Man, guy’s got balls.

And THAT, friends, is all the bruise that’s fit to print this Friday.