Tonight saw the Bears take on the Springfield Falcons for the first and ONLY time this year at Giant Center. Tonight also could have been filmed and sold as a “Wierd Hockey Moments” clip tape.
Of course, the exception to the wierd would be the home comebacks not only of Dean Arsene, but also Jay Beagle. Glad to have you back, guys.

Beags showing why we keep him around

The first period saw the Falcons come out saWINGING. In the first half of the first period, I could have sworn the Bears were going to get steamrolled, but an Avery-ish dive by Bourque that gets called as a Falcon tripping penalty gets the team back in the swing of things. (And seriously, it sure looked like a dive. Bourque came trundling over in front of the goalie and sort of jerks once in front of him, then takes a header into the ice. Well done, but still a dive.) In response, here goes the Falcon goalie wandering all over the place after the puck. A Bear shoves one of the Falcons into his own goalie, and dishes the puck over to Kyle Wilson, who juts gently redirects it into the very VERY empty net. The entirety of Giant Center holds its collective breath on an interference call, but the goal stands. 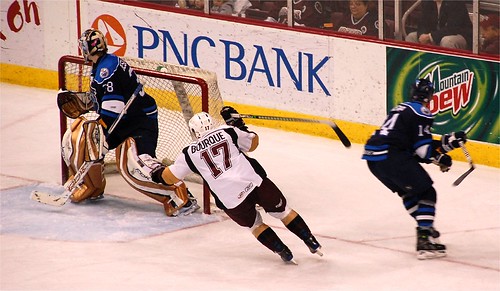 Bourque’ll get there, diving or not!

And not just that, Wilson went on to get the hat trick…. um.. interspersed between a group of shoving/fighting/grumping matches. After the second Wilson goal, the first shoving break was in the Bears end and circulated around Motzko, who was definitely swiping as he went down but somehow caused only Louie Robitaille and the Falcon’s Farynuk and Trukhno to hit the boxes. 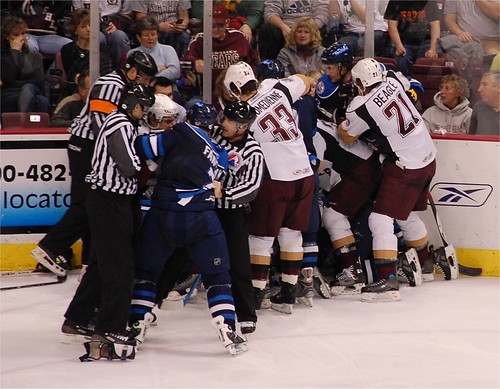 The roughing, it starts!

That’s when the party started… the party in the box, that is. A bizarreness in the Bears end second period saw Barney sit on a guy in the back of the net.. no, literally IN THE OUTSIDE BACK of the net, and the rest of the teams pile on top of some poor unsuspecting Falcon Chris Bourque had in a headlock. As they pulled themselves apart and one of the Bears on the edges (might have been Fehr) respectfully declined to have his butt handed to him, one of the Falcons pulled himself up, and limped towards his bench. In the Bourque Pile, he had obviously gotten his leg twisted up (see picture) and was favoring his knee something fierce. One thing I dislike about his crowd, they don’t applaud an injured player off very frequently. No matter who you are, my inner ethical warrior demands that you honor a fallen opponent for sticking it out in there long enough to GET hurt in the first place. Now, there were three Bears (Hunt, Morgan, Pokulok) plus Louie in the box, and three Falcons plus the injury. Somehow, all the penalties work out, and five guys each come out to take the faceoff. 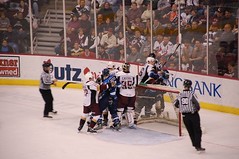 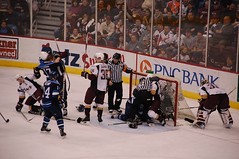 everyone on the Bourque pile! 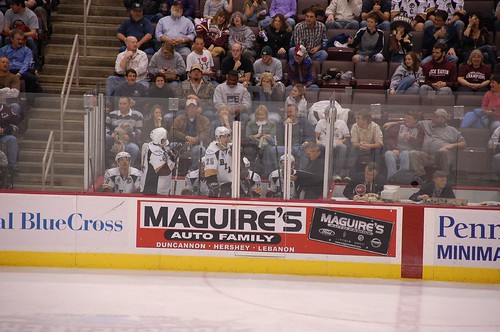 Look carefully, there ARE actually 6 of them in there.

Of course, the Bears pulled out the double PK and came back swinging for a final score of 5-1.

The last on the fight card? Sasha Pokulok right at the end of the second, who really wasn’t as fearsome as I hoped he could have been swinging the fists. 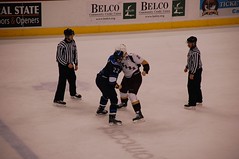 The Falcons definitely had the better puck handling skills this game, but I can’t slight the Bears entirely, as their positioning and positional awareness was the best I’ve seen out of them all year. Clymer seems to be able to read plays before they’ve even fully formed, and he was in the right spot to score more than once. Same to a few other Bears.. I saw Bourque pre-read a couple of nice ones, and obviously Wilson was where he needed to be tonight.

At some point we also broke Motzko. He came over to the bench with no weight on his right foot, and limped down the runway. No word at the end of the game, so we’re all waiting to hear what’s happened to him. Updates as I get them, folks. (perhaps it was karma for not passing the puck.) What? I didn’t say anything.

Beagle, dear god, I’d forgotten how fast he was while he was gone. On a few of the almost 2 on 1 breakaways by the Falcons, Beagle was back on the blueline from the opposing goal line before Pokulok woke up and got moving. He’s still really the kick-his-own-assy rookie that we watched during Caps camp, and he’s freakin’ amazing. I’m hoping that the Beagle/Gordon/Someone (usually Joudrey) line gets more playing time, as I have a feeling once they settled in, they could be ridiculous. If the Caps don’t sign him to a contract next year that lets them call him up, if not just outrightly signing him to the big team, they’ll be fools. 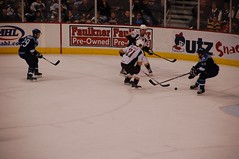 Also saw Gordon lose his mouthguard on the ice AGAIN. I couldn’t figure out at first what he was doing going in little circles and looking around until he bent down to pick something up and THEN came off. If he keeps it up I’m going to buy him a mouthguard with a tether on it and personally find him to give it to him, grinning ear to ear the entire time. He’ll get it.

There was a great moment between him an Lepisto as well, when Lepisto broke or lost his stick and Gordon gave him his…. forgetting that Lepisto shot on the other side. Lepisto tried it once, and sorta chucked it away, disgruntled. When they pla
y finally ended, Gordon retrieved his own stick and sorta jokingly whacked Lepsito with it, like “What, not good enough for you?” He’s such a dork, and I love watching it. I’m such a people-interaction whore.

i gots no stick!

(and Colby Armstrong, get well soon from that bruised hip. I know you can’t stand to be without Sid for too long, but it’s okay. You don’t need to get hurt to hang out with him, I’m sure he’ll still be willing to play video games with you even if you’re healthy.)