1) When I have my own band, I’m going to call it “Mike Green’s Wandering Eyebrow.”

2) For more time wasting, find out what hockey players share your birthday!

Mine? Well, I share with (and am older than):
Jonathan Bernier, #45, Los Angeles Kings
and yes, one doggonned little Sidney Crosby, #87, Pittsburgh Penguins.

3) Added another team to the background image. Life points to whoever figures it out first. More life points for whoever can tell me who I follow on all of the teams on there (and there are a few where I don’t really follow ‘em at all, but proximity wise, they had to be there.)

4) And just to make up for the horrible mediocrity of this post, I’m going to throw another picture at you. 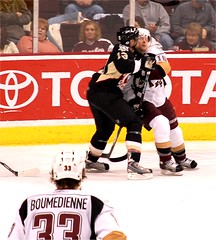 Andrew Gordon says “NO, NO HUGS FOR YOU.”

(Please note how I’m not saying anything about the Pens/Caps game, as we’ve hit full on brain confusion. As I was saying to people the other day, it’s like the Bears/Baby Pens, where I’m yelling “SHOOT! SHOOT! SAVE IT, SAVE IT! HE’S DOWN, MOTZKO, TOP SHELF! TOP SHELF! CAN’T YOU SEE CURRY’S HURT?! GET UP! GET UP! MOTZKO, TAKE ADVANTAGE! CURRY, GET UP!” About all I think I’m really able to say is that a)I still sort of unconditionally love Quintin Laing for throwing himself in front of moving pucks, and congrats to him for being in the starting linup last night, and b)I’m actually rather glad that ended the way it did, because everyone gets points of some sort, and the Pens have proven that they’re not just the vehicle for Sidney Crosby. For the Flyers, however, I’m not going to be satisfied unless someone pastes Tiny!Briere through the glass and into the 6th row, and it’s a complete “Pens on an Ego Rush” romp for Malkin and Staal and Talbot. And Army, if his butt’s healed by then.

And speaking of Army, I am not to be understanding why the Ovechkin attempt on Malkin last night is to be praised and celebrated while all of the very similar Army hits are usually booed and hushed up. (and thank you, announcer men on vs, for getting to that similarity oh, what, halfway through the second? Fired, all of you. That’s the first thing I said.)
CapsChick posited to me last night that it was because Ovie didn’t go in with his elbows or shoulders. I can buy that to some level, but Army doesn’t usually go in with his elbows either, just the shoulders. And I’m the first to admit that the details of the rules of hockey aren’t my strong suit, but what the heck are you supposed to dump a guy with, if you’re not allowed to lead with the shoulder? In roller derby, that’s a tactic, shouldering into people, and I’m sure we’d be even more fearless wearing the kinds of shoulder protection these guys do. Please, if I’m missing something in there somewhere, let me know. Is all very unclear right now. Like mud.
My supposition on this, though, is that people didn’t like the Army hits because he usually connects, while Ovie attempted, threw Malkin off balance, but didn’t really nail him. If he HAD actually drilled him, I’m guessing there might have been some bad blood there, and the announcers might have played a different tune. Backing this theory up is the fact that when Army missed the Flyer he was aiming for and threw himself nose-first into the boards in Philly, people actually did say “Man, that woulda been an awesome hit.” Okay, not the people around me, as they were %@(%$#*(&*!!! Flyers fans, but after the fact, I saw that a couple of places.

Anywhoo, there’r your deep and not so deep hockey thoughts for the day. If my teams collectively can make it an anti-orange showing this weekend with Pens/Flyers Thursday and Bears/Phantoms Friday, I… well… I’ll… uh… I’ll…. actually get around to piercing my nose! There. Everyone wins, I poke holes in myself. See? Now they have to do it. )