In other words “Tonight The Bears Lost 5-0 To The Manitoba Moose and Only Steve Pinizotto Showed Up For More Than 10 Minutes.”

I don’t really even know where to go with this recap, because it was just one bit of flaming wreckage after another. From the beginning, the Bears were getting outrun and outmaneuvered, allowing the Moose to effectively throw them around with some silly little dipsy-doodle moves, giving up avoidable odd-man-rush breakaways, and hanging BOTH goalies out to dry a few times. (Yes, that’s right, after the first three goals, we pulled Freddy in hopes that Cheez could bring it.. he brought it, but not far enough.) 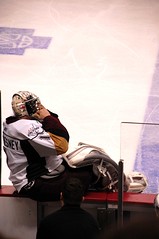 
Just to emphasize the level of suck that occurred, the Bears didn’t get their first shot on goal of the entire GAME until 14 minutes into the first period. The crowd cheered like it was a goal when it finally happened. Somehow, though, by the end of the game, everyone had 33 shots. Bizarre, as the Bears are usually trailing by 5 or 6, even if they win.

Happily, Pinizotto was attempting to step up and carry the team tonight, throwing his body around and delivering some crushing checks. His puck handling’s still not the best, and he wasn’t 100% on everything, but at least he was trying to get something going a few times. Patrick McNeill is also looking better and better… the only thing I can pick on him about this time is accidentally allowing a 2 on 1, but to his credit, he did bust his ass getting back there to help stop it. 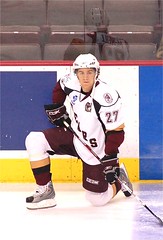 There were quite a few questionable calls on the part of the refs, which the sell-out Bears crowd let them know about quite handily. Louie Robitaille needs to go back to elementary school and learn to keep his dad-blasted hands to himself, because 11 penalty minutes is about 9 too many in a game like this. 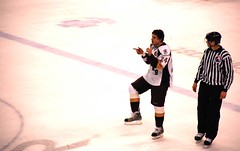 Highlights of the night included poor broken Andrew Gordon being forced to hobble down the on-ice carpet before the anthems to FINALLY get his AHL Player Of The Week trophy… for a dislocated toe, they’ve got him in a knee-high walking boot, and he seems not-so thrilled about it. (who could blame him?) Gordo actually watched most of the game from up on the end of Press Row… I can only guess at his through process as he saw all of this happening. Get better, Gordo… the team needs your constant willingness to go out and fight for everything back in the lineup, not to mention in the locker room. 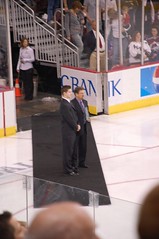 Of course my camera focus goes wierd for this. Gordon and Doug Yingst

Jay Beagle was also having a little fun before the game started, working his puck handling skills between the legs of teammates as they stood and waited for their turn to shoot. I wish I had gotten pictures, but you’ll have to take my word for it.. I only caught the tail end of this. Surprisingly, Beags was among those who showed up once in a while, but didn’t stay consistent…. there were flashes of two or three minute greatness in a couple of different players on a couple of different plays, but it never seemed to catalyze anything better than mediocre play into happening.

From what I could surmise, a lot of the issue tonight is something the Bears have consistantly had problems with.. their on-ice awareness. Nobody seemed to be on the same page… hell, sometimes even in the same book. I can chalk some of that up to the number of new guys that have been thrown into the team (Dickenson, Syvret, Giroux) not having had time to gel yet, but still. Unexcuseable for those of you (Joudrey, Bourque, Barney, LOUIE.) who have been playing together for a season to consistantly biff those when you’re out there on the ice together.

Also, Danny Syvret looks AMAZINGLY like a slightly less angry Chris Bourque with all his gear on.

I’ll be in the cheap seats Sunday, hoping that they can redeem themselves. You beat ‘em once, do it a-freakin’-gain.