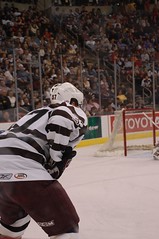 Sami Lepisto was back. Also, it was a jersey auction night, hence the reason it looks like you’re watching Cell Block Q’s hockey team. I guess these were knockoffs of the uniforms from the 30’s. Dear god, sometimes I’m glad it’s not the 30’s. 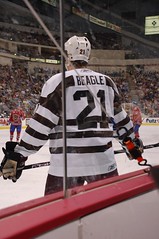 I had ridiculously good seats. I was down at the bottom of 105, which was new and different, because as well as being on the glass, I was on the side of the ice I’m usually staring at. I’m still not sure I like sitting right down ON THE GLASS unless I’m really photo-oriented, because you lose a whole corner of the rink to see the game. 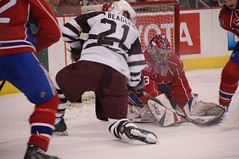 Jay Beagle didn’t score last night for lack of trying. Somehow, he kept getting caught up right before getting there on a few really nice rushes, and by the end of the night seemed pissed off enough (probably at himself) that he was starting to play a little rougher than usual. 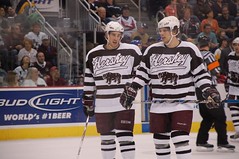 Oh yeah, Boomer was back too. Since it was jersey auction night, we also got to see Clymer for the first time in a while. He looks skinnier to me. And poor Barney’s hobbling around on crutches and attempting stairs with a huge plastic boot on. I think they just took the one from Gordon and slapped it on him. 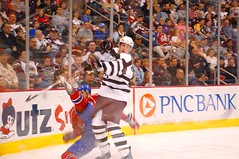 Revelation of the night, which will get me implicated for staring at Beagle’s crotch in a faceoff (in my defense, where I was sitting got butts all night whether I wanted them or not) was that there are actually zippers down the inseams on those pants. I do think that Beagle and Barney have shredded the zippers through, but there are actually zipper teeth still attached to the pants. Swear.

Chris Bourque=small child. Of course, ridiculously talented small child, as he scored 4 of the 5 goals from last night, but all night it was hilarious how huge the throwback jersey looked on him. It was all “Look daddy! I’m gonna play hockey too!” Okay, okay, I can’t hate too hard on him, he’s growing on me like those bacteria in your stomach that you know you need but you’re still not so sure about.
3 Comments