…but they say do what you’re good at.

To that end, HERE is my Stanley Bracket/Squee Cup ‘08 prediction sheet. And because now I’ve got you looking at it, my justification of squee choices, one per day. For the origins of the Squee Cup, talk to Finny. And don’t take it too seriously, god knows we don’t. I’m not taking Squee to the level of the Puckbunny!Squee which involves desperately needing to get into said Squee’s pants. Instead, my Squee is more of a turning-to-the-Hlogger-beside-you-after-brilliant-play-and-saying-”I FUCKING LOVE THAT GUY”-Squee.

Today, as it’s the HOMGOHBOY game of the night,

And let me tell you, it was a task to come up with one Flyer I could stand long enough to deal with for the duration of the Squee Cup. I’m still hoping they get shucked by the Caps in the first round, but we’ll see.

After Finny opened it up to goalies, however, it was a little simpler. Because he’s a goalie, I’ve never seen Biron outrightly target anyone for retribution, unlike some.. ah.. other… Flyers, which automatically raised him into contention. Randy Jones almost squeaked in for his dumb Extra dating video, but with the Bergeron bashing at the beginning of the season, there’d have been Hloggers clamoring for my head if I chose him. (not that it would be the first time I chose someone who took dudes out, see Colby Armstrong). But because Biron always seems to be pretty good-natured and because I have a weak spot for the backup goalies who finally get a chance (see, Ilya Bryzgalov), I went with Biron. Also, his eyes are just strange enough that as a consummate people watcher, I continually want to just stare at him. He’s like a big husky puppy. 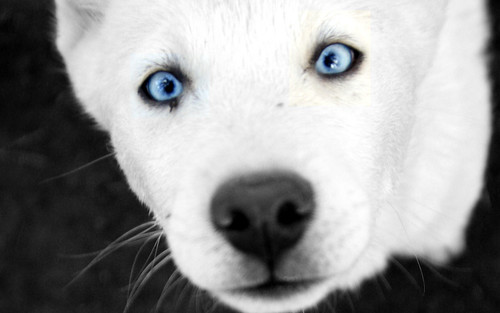 A big husky puppy with 5 shutouts in the normal season and tied for 13th in the NHL for goalie excellence. Not too shabby, for only his second year starting for a big team.

As for Fehr, I pretty much knew my Squee was going to be one of the ex-Hershey boys. I considered Lainger, but my guess is he’s not going to see too much ice time (and I have to take into SOME consideration not embarrassing myself stat-wise)> Lepisto would have made it, if I was confident he was going to stay there through all of the playoffs (who freakin’ knows at this point), and I did briefly consider going with Green, before figuring that ALL OF HLOG was going to use him as their squee, because he is truly one of the most Squee!Worthy Caps, both shallowly and as the leading NHL defenseman scorer.
I ultimately came down to Fehr, because I knew he’d play, and for the few games they left him in Hershey, man, he was fun to watch. He’s another of those guys who really does seem to enjoy playing just for the sake of playing, but as a big dude, he’s also not afraid of throwing himself around into people. He’s also a departure from the PIM-high guys I usually like to watch, having only 6 in 32 games played with the Caps. Sure, he’s only got one goal, but they also serve who only clear the puck. 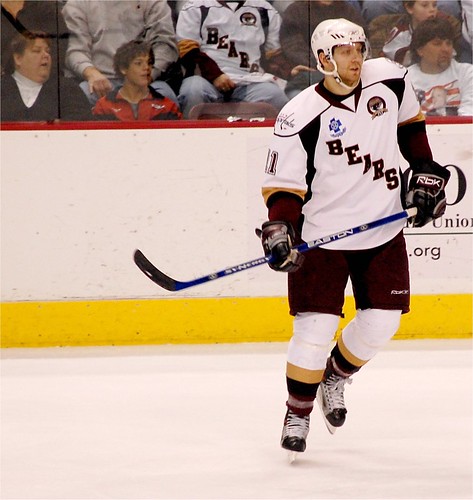 Glad to be back in his first game with the Bears

Stupid Fehr fact? He’s exactly a month younger than I am.

Anyway, there you have my two Squee Cup choices from the biggest game of the night. More to follow tomorrow. Who do you want to see next?