Be still my heart, I’ve been waiting all season for an all out live liner WITH A GOALIE FIGHT. And even better, it was the Cheez in goal, who gave it as much as he could after having been yanked off of the Phantom who shoved him over…. he spent most of his time on the ground, but I blame a lot of that on the ref who toppled him to begin with. Watch the clip, you’ll see.

My seats were right on the curve around the opposing team’s goal… great seats closeness-wise, but you lose a good amount of the rink there, and I haven’t yet mastered the switch to the jumbotron and them back to the action, as I’m usually somewhere I can see the whole rink. Of COURSE the corner down the same side I was on was where the line brawl happened. Oh well, at least there’s video.

For your scratches tonight…..

Barney, some n00b, Lepisto, some n00b, P. McNeill.
Clymer, Arsene, and Robitaille were in the building, but I didn’t see them in Scratch Corner

The Phantoms just seemed desperate for a lot of this game. There was a lot of chasing the player instead of the puck, for the sake of what, I don’t know. 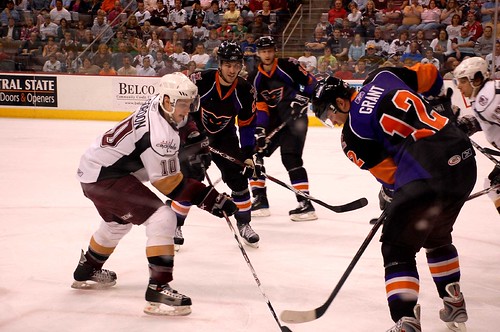 no chasing yet, but it’s coming

They really had nothing to lose but respect for themselves, as they’ve already clinched a playoff spot, while the Bears were still fighting for one. Of course, perhaps this implies they’d rather play Hershey than Bridgeport in playoffs, if they were willing to let the Bears waltz all over them to the tune of 5-2, but that may be giving them a lot of credit for pre-thought Penguin style. (especially because the Bears meet the Baby Penguins in the first round, not the Phantoms…by the way, clinching that tonight)

The Bears, overall, looked good tonight. Instead of wrapping the game up with absolutely no energy, they all seemed to come out tired instead, but pick it up halfway through the first. Andrew Gordon got the first two goals to tie it up, but never quite picked up the third for his third season hat trick. 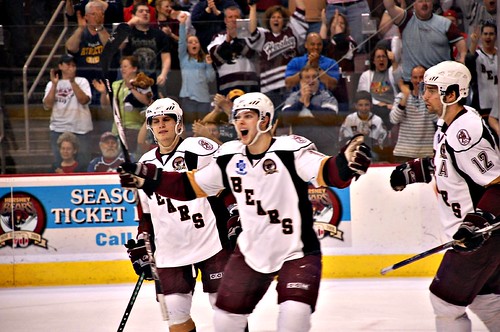 The Cheez was (after the first two) on his game like whoa. There were two almost-breakaways that he stymied, and a few wild scrambles in front where he couldn’t stop the rebounds that somehow didn’t go in either. He sort of proved why it’s good to play “flipperlegs” during warmups. Someday, I’ll get a video of that, as it always amuses me. Again, I’ll also harp on the fact that if the Caps dump him in favor of the untested Varmalov or Neuvrith, I may well have to march on Washington to object. Sure, he’s not at the very top of the AHL goalie stats list anymore, but the dude’s got some moves. I fully believe that given another year or two and a constant goalie coach, he could be the next Bryzgalov-esque backup who gets a chance with a big team. 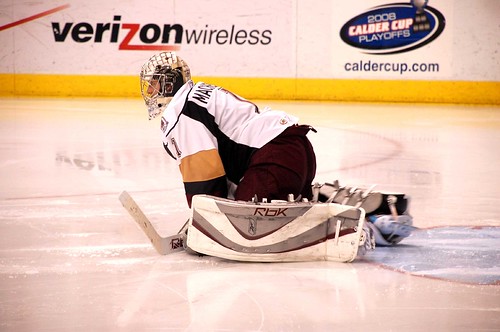 On the Bears’ part, there was also a lot more bodily-shot blocking in this game than I’ve seen since we lost Laing to DC. Syvret was in on it, as was Gordon a couple of times, and Bourque always seems to be in there making himself big when he needs to be. (which is a punchline in and of itself, really.) 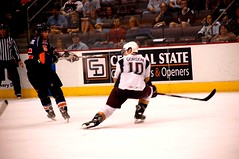 Of course, the highlight of my night (other than the LINE BRAWL WOOO) was the fact that I gave myself permission to fangirl for one game and one game only, and succeeded in getting my Gordon jersey signed. 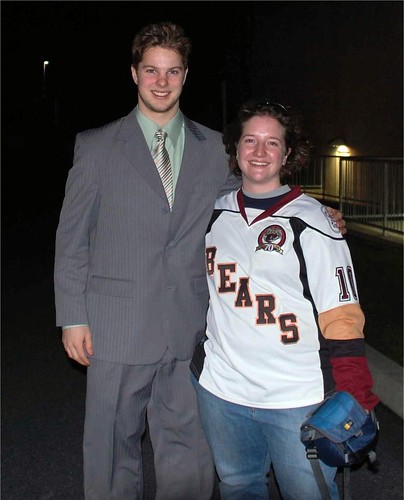 He was the last out (of course) but was really apologetic about it, and also says he’s going to go for the playoff mohawk as of next week… Please excuse my ridiculously shiny face, but note the fact that I managed to keep my eyes open in this picture, unlike all the rest of the pictures I got with Caps at Hockey and Heels. Which is good, as this was sort of a Once Chance and Once Chance Only picture. I may be a complete tool, but I’m a happy tool.
1 Comment