Having Jay Beagle’s reaction when you pull it out for him to sign be goggle eyes and an impressed “WHOA”? 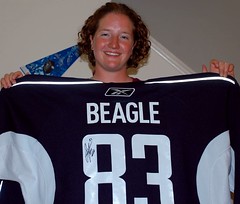 He seemed genuinely amused by it, and kept saying “I didn’t even know they sold these!” Of course the second best moment of signing was the fact that he had to pause and look at the number on the back. Here in DC he plays 83, while in Hershey he’s number 21.

Other notables today: Andrew Gordon, who still looks like he’s having the time of his life, and made a damn fine showing overall. Oskar Osala, who’s a Finnish transport and seemed to have a good grasp on positioning. Jake Hauswirth, who was on a line with Gordon and someone else who kept changing, and managed to score in every scrimmage. Alzner was impressive, but pre-destinedly so, making him a little less magical and fun to watch.

Other notables, at least if you’re me: Steve Pinizzotto, who spent 4 WHOLE MINUTES in the box during the scrimmage. Oops. At least we know he hasn’t changed. Patrick McNeill, who is still playing like he did by the end of the year last year- he’s still not making hugely big plays, but he’s improved and continues to. He also got the first goal in the shootout today, so mad props to him. Simeon Varlamov, at this point has my vote for second in Hershey. There’s just something about Neuvrith that makes him a little harder for me to get behind.

As soon as I get all of the pictures uploaded and sorted out, I’ll make a separate post just for them.