In case you haven’t been following the goings on at Caps camp, they’ve been competing for the newly minted Gaetan Duchesne cup this week during the inter-team scrimmages.

Well, we finally came down to a winning team today, when the Jay Beagle, Chris Bourque and Andrew Gordon Group A took on the Dean Arsene and Alex Giroux group B. Although Group A had a 2-0 lead most of the way through, age and wisdom triumphed over youth and enthusiasm, with Group B bringing it home.

Here, your Group B Winners: 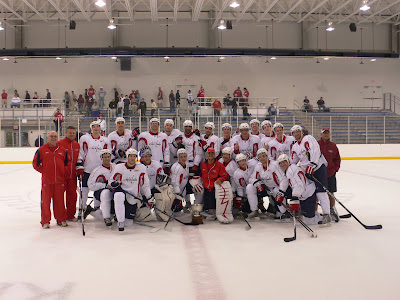 Also, today the Caps released the roster for their preseason game against Carolina. Of the Bears ilk likely to be there, Machesney, Bourque, Beagle, Fehr, Aucoin, Giroux, Laing, Joudrey, A. Gordon, Morin, Perreault, and Lepsito. I’m just hoping a good number of them hang in for the preseason game against the Flyers as yours truly got special dispensation to miss roller derby practice in order to go to that one.

Also, has anyone heard/seen/figured out whatever happened to Ben Clymer? I know he was supposed to be on waivers from the Caps, but did anyone pick him up? I haven’t seen his name go by on anything lately.