I need to learn from my track record in the Wachovia. Obviously, as much as I hate them, the Flyers should keep me around, as they always win when I’m in attendance. As such, I am hereby not allowed to go to games there for teams I care about anymore.

Anyway, after figuring out how to get my gameworn Jay Beagle TENT to stop flapping around my wrists, I wandered around in circles inside and schemed lower-bowl seat stealing plans until warmups happened and I could go abuse my camera skills. While waiting, I met a Canadian dad and his son who make one or so game a year, and try to make the most of it. I wound up answering a lot of the son’s questions about the Caps lineup and who was missing-I picked out Green and Ovie quickly, but Morrisonn is still in that clutch of three who are interchangeably him, Kyle Wilson or Jeff Schultz in whatever order I want them to be. Also conspicuously missing, Brashear, B. Gordon, Fleischmann, Kozlov, Laing, Bradley. 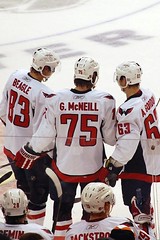 I think the highlight of warmups however, had to be me suddenly realizing that A. Gordon and Beagle were both dressed and warming up with the big boys. I tell you, I almost dropped the camera, and I’m not sure the high pitched squealing noise was actually all in my head, although I’m going to tell everyone it was. Second highlight? Gordo falling down pre-game with nobody around him… while he wasn’t doing anything more difficult than standing. 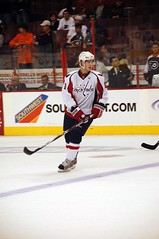 The first period, the Caps actually came out looking pretty damn good. They were giving the Flyers a decent runaround, but after a while it was apparent that everyone was suffering from Bear Syndrome, in which you refuse to shoot for whatever random reason. There were a lot of almost chances that just didn’t get shots. I know as well as the next person that the garbage goal isn’t the way to get glory, but I’ll take the win before the glory, thank you. And Boudreau agrees with me:

“There were a whole bunch of guys trying to be cute and make the fancy play,” Boudreau said. “If they just would make the simple play, boom, boom, we in. But trying to beat the same guy three times doesn’t usually work, not in the league anyway.”

On some level it also looked like the AHLers were stuck in the learning curve too. CBourque and Giroux and Lepisto were holding their own, but G. McNeill stuck out like a sore thumb, and even Beagle and A. Gordon had a few moments of “Now what?” The lines where Boudreau gave Bourque A. Gordon and Beagle a chance to get out themselves, it didn’t look half bad. I’m willing to give it a lack of practice in the group as a whole there. And it’s not to say you could pick out the AHLers as much as you could among the Flyers. Ours, as a whole, melded much better with the big team.

As much as it pains me to say this, CBourque was on his motherlovin’ game. My guess is that if he doesn’t stick right out of camp, he’ll be the first injury callup, followed quickly by Beagle, then Gordon. 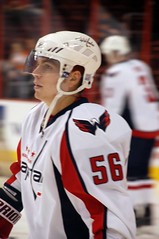 And the Beagle fight. I think the man in front of me wanted to kill me, as I was standing and flapping the tent sleeves near his face and screaming ‘HIT HIM AGAIN, BEAGS! DO IT! TAKE HIM OUT!” at the top of my lungs. But really, pairing off with Steve DOWNIE, of all people? At least choose a Potulny for your first NHL fight, Beags! For someone who was in the non-contact jersey yesterday, that’s gutsy!
Of course, I’d be lying if I said it didn’t make my night.


I’ll get the Hockeyfights.com version up if there is one… I actually thought Screaming Girl in this one might have been me, as that’s what I sounded like encouraging Beagle, but the angle is wrong from where I was sitting.


UPDATE: Beagle on the fight, from pennlive.com:

“I just threw punches,” Beagle said. “He’s a good fighter. He knows what he’s doing. He knows how to protect himself. We just went toe-to-toe and it was fun.”

Grant McNeill had the first fight of the evening, pairing off with Cote in what was really just sort of a cakewalk for Cote. Supposedly, G McNeill’s got one eye swollen shut and he’s not looking too hot.

Of the defensemen,I think the decision between Lepisto and Alzner is going to be whether the big team needs a stay-at-homer or another Green. Lepisto was definitely going out and not being afraid of shooting the puck tonight, which is his usual MO given the chance, but Alzner was a solid wall of Cap near the net when he needed to be. 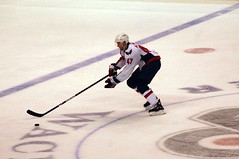 I was also pleasantly surprised by Brent Johnson in goal. After seeing everything the club went through with goalies last year, I assumed they had more or less written him off, but he’s not going gently into that good night. With the exception of Hasek, (who I still think wins on pure luck) I’ve never seen anyone contort themselves quite as much as Johnny did last night-but unlike Hasek, Johnny’s contortions had purpose. 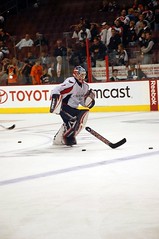 Next up, Bears meet and greet tonight (if my ticket gets here in time!) and then Bears v. Pens october 4.