Well. For a team that kicked the pants off the Bears for the Calder Cup berth last year, you’d never recognize them as the same bunch.

The Bears were looking amazingly strong all night. Passes were making it to other people, shots were (obviously) going in, and all those little fancy mc fancypants moves that got everyone in trouble last year were actually working. There were more than a few successful drop passes that I saw go by, and at least five or six times that someone managed to put it through a Penguins’ legs.

Of course, they were also playing like our roller derby team plays, where both teams were down one person in the penalty box 90% of the game. There were three real ripping fights, and hooking/slashing/butt ending/tripping/biting/farting/sleeping penalties all over the place on both sides. 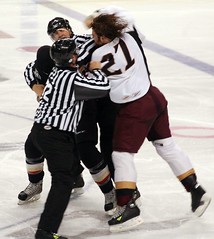 It also wouldn’t have been nearly as close without Cheez, who had the shutout until halfway through the third period. Somewhat nicely, the entire crowd went, “Awwwwww….” when the Pens actually scored, as everyone had been hoping for it. Of course, as soon as I realized it could happen, I knew it wouldn’t. Superstition strikes again! 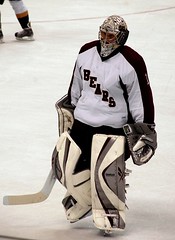 Having only seen Graham Mink as a babyShark, I have to say, I quite like his style with the Bears. He’s a nice mix of Deano’s ass-boardings and the Patrick McNeill/Andrew Gordon warmup levity.

Josh Godfrey was on fire tonight, with his first unofficial AHL hat trick. He seems to be especially good at just shooting no matter what, which is what this team refused to do last year over and over again. I can only see good things coming from this.

Also on my Worth Watching list, Oskar Osala. Always in position, not afraid to be a big guy who throws himself around, and took on WBS’ Stone for messing with him. He left bleeding from the scalp after the fight, but did come back for the third period. I’m not going to predict Beagle levels of greatness yet, but he’s put himself in the running to be a THTM favorite this season. 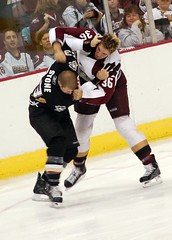 I also now have photographic proof that the Gordon development camp jersey exists as well, as it was at the game tonight. See, if I had been 80 people closer to the front….. but hey, I have Beagle’s and it’s been proven a success with the Downie fight, so I won’t argue.

Unrelated, I find it amusing that the Bears are using “Do You Speak Hockey?” as their slogan this year. I need to get my web analytics up and running to see how many people find this site online as a mis-remembered version of that.

And who would I be if I didn’t leave you with an unsolicited picture of Andrew Gordon?