Everybody, this is me: 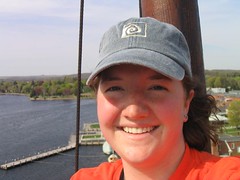 Granted, that’s a few years younger me, but from that picture you’d be able to pick me out of a lineup or recognize me at a hockey game.

On the other hand, this is me when I’ve been told that a hockey game happening at least 2 hours away from me that I’ve been planning all day to watch is blacked out for some reason that nobody can ever seem to get straight. 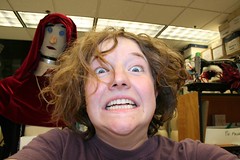 Obviously, this is not a face you want to see coming at you if you’re a TV executive, especially not connected to a Chris Bourque sized girl with a Donald Brashear sized desire to pound some sense into someone about the logic of the TV Sports Blackout.

I understand that the original idea of the blackout was brought around to force people to go to the games and pay money for tickets instead of sitting at home on the couch and getting to watch for “free,” but according to the Everlasting Wikipedia, NHL games are blacked out for two reasons:

1. The local station (like Comcast Sports Philly or FSN DC) has the exclusive rights to the game, and it’s only shown in the local area.

2. Games that bigger networks have bought are blacked out in the area the game’s being played. (In the case of a Flyers/Caps matchup in DC, DC wouldn’t see it.)

I understand number 2, as it works the way a blackout historically has, but that doesn’t mean I agree with it. I can grudgingly admit that teams need to sell tickets, but I also feel that they need to recognize their fans with limited budgets. But that’s a whole other dead horse.

Number 1, however, just seems patently ludicrous with the advent of NHL’s Center Ice/Gamecenter. I’m sorry that I’m a hockey fan who lives outside the metro area of the team I want to follow, but that must happen a lot. I know a Wild fan living in Oregon, I’ve met Maple Leafs fans in Philly, I know a Pens fan in Vermont, and that’s all just scratching the surface. On Gamecenter the other day, although I’m living in Harrisburg, PA and we get all of Philly’s broadcast stations, I was blacked out of watching the Penguins/Capitals faceoff in Pittsburgh.

Now before someone gets all uppity on me, realize that Pittsburgh is a 3+ hour drive away, and 11+ dollars on the turnpike. Remember also that Pittsburgh has entirely sold out the Mellon Arena pre-game for the last year and a half. Now, knowing that I’m not in DC or Pittsburgh’s watching area, there were more than likely no tickets left had I driven to the ‘Burgh day-of, it wasn’t televised on a national network, and I had just shelled out $20/month for Gamecenter, tell me why I wasn’t allowed to see this game.

Easy, because Pittsburgh was broadcasting, and I wasn’t in Pittsburgh. Sorry.

I understand that somewhere in here there’s a moneymaking scheme, and I’m happy to go see all the live games I can, but something’s gotta give, guys. You bill Gamecenter as a way to keep up with teams on the go, but even out of a certain viewing area, I’m not keeping up with anything but your little blackout graphic. One semi-pathetic email to Ted Leonsis later, and although I’ve made myself feel a little better by speaking out, it doesn’t completely negate the fact that I still didn’t get to see Malkin slammed into the boards by Ovechkin live, or watch Bruce Boudreau turn that lovely shade of purple he gets sometimes.

Especially from the Caps, who keep talking about how all they want to do is bring people in to see the game, they want to spread the word about hockey through all media, have embraced bloggers and Twitter-ers alike, this just seems like hypocracy, when fans in the Hershey Bear area of Central PA (part of Philly’s broadcast zone) can’t watch their boys play on the big team because someone’s blacking them out.

But you know who has figured out that letting their fans watch 82 games makes sense? The Columbus Blue Jackets. Granted, this is only them lifting the blackout for people who subscribe for Center Ice, and it’s only in the local Columbus area, but it’s at least a baby-stumble in the right direction.

Daddy Leonsis, what I want for Christmas is a way to watch the Caps play no matter where they are.