Of course, now Oskar Osala has scored another, and Matthieu Perrault has scored one, so we’re at 3-3 now. So much for the grumpy blog post, as at least the Perrault/Bouchard/Osala line has decided that someone needed to remove head from sphincter and score. (end of game update, the Bears went down in the shootout where Osala and Perrault both missed…damn and blast. However, Osala is now in the top AHL points-makers, and was the second star for the night.) It’s nice to see at least ONE line starting to get their act together, now we just need to see all of them follow suit.

But besides that, I asked earlier-on in the preseason whatever had happened to Ben Clymer. I think we had gotten down to the point of finding him playing for Dynamo Minsk, but it turns out that he’s also blogging for The Hockey News in his free time. his first post is on playing Avangard Omsk the day after Cherepanov’s death, and it’s pretty powerful stuff.

And I’d be remiss if I slacked off in my duties to bring you awkward pictures of Bears players trying to sell themselves for Army Strong Jersey night. (Side note, I know it’s for charity, but damn, people. Buying two $1000+ jerseys in one night? Would you like to donate to my cause? It’s called “Stay Fed And Clothed.” On the other hand, you could just score me one of the jerseys next time. Y’know, blogger appreciation and all of that.) 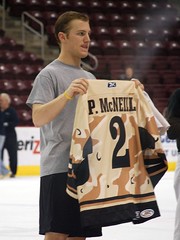 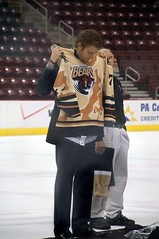 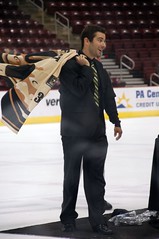 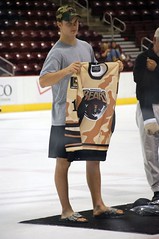 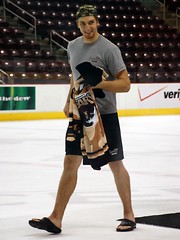 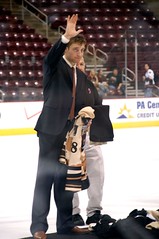 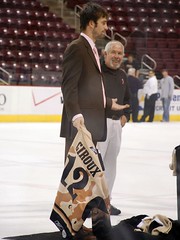