It’s been an intense weekend, and I still have a day to go. I’m still in DC at this point-we just finished watching the Caps @ Devils with Ovechkin’s ridiculous .04 seconds to go shot. The general consensus is that they hardly deserved this one point, but we’ll give it to them anyway purely for the awesome that was that shot.

The game last night, on the other hand, they deserved every minute of, between the Russian Machine starting the first cracks towards breaking his scoring slump: 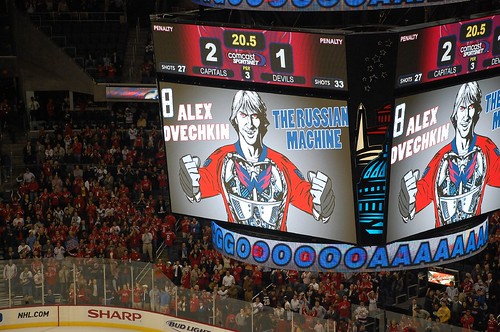 and Jose Theodore standing on his head: 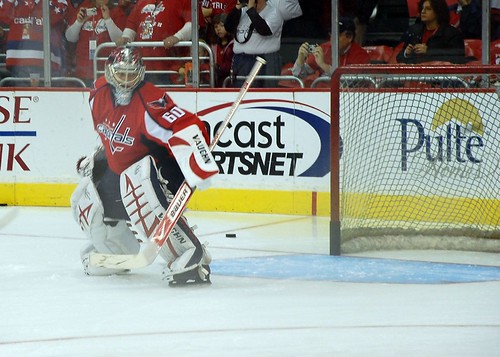 and Tyler Sloan playing like a man possessed with more TOI than anyone really seemed to expect out of him: 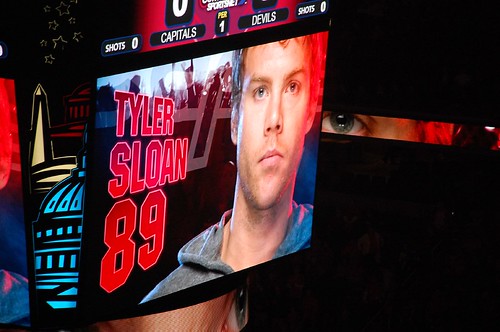 Of course, it was a stunningly boring game, as they were playing against the Devils, so numerous times we were virtually asleep. Caps Chick claims I need to come to a game against the Thrashers or the Hurricanes to really see the team in action, as all I’ve seen at this point is pre-season against the Flyers, the Maple Leafs and now the Devils.

My highlight of the game was getting to see Eric Fehr AND Tyler Sloan in action- Fehrsie had a few excellent chances on goal, and Sloaner wasn’t obviously an AHL callup at all… all of the Caps media/announcer types really seem to love him. He was playing basically the same game he does at home-if you don’t notice Tyler Sloan, he’s doing his job, and doing it well.

Speaking of the Bears, they tore it up out there tonight. I should have ponied up the 6 bucks to watch it online, but the final score was 7-3 WITH a Philly penalty shot AAAAAAAAND an Osala hat trick, which, if i’m not mistaken, is his first North American hatty, and also pushed him up to be the third all-AHL rookie. And of course, the game did start as the Finland Show, with Oskar and Sami Lepisto getting the first two goals.

Update: Image from the Patriot News…

that’s Alzner attacking Osala after the third goal. May I just say, damn this team is cute.

Of course, I’d be remiss if I didn’t give a shout out as well… This is THTM reader efdbrianmills’ daughter with her new prize-Oskar Osala’s autographed first star stick. If she wasn’t so damn cute, I’d be jealous.

See y’all tomorrow at Giant Center! No promises where I’ll be, as I’m rushing in from Camp Hill and hoping I can still get tickets, but I’ll be there somewhere.