I spent the weekend watching the WHL’s Portland Winterhawks, and didn’t think about the Bears game until midway through the second period… when they were already up by 7, so obviously my lack of attention didn’t cripple them unduely.

The ‘Hawks, on the other hand…
I have to say, after a re-vamp of the organization with new owners, some new faces on the team, and a new outlook on things, they did look better than they did last New Years’ Eve playing the same team. However, they’re still miles away from where they could be.

I’m trying not to judge them too harshly against the Bears or the Caps, but the Hawks (even by Bears standards) have some pretty damn awful on-ice awareness. Drop passes were dropping to people who weren’t there anymore, cross-ice passes were going to the boards, and even while clear and open, only a few times did someone actually seem to know where his teammates were.

The game was actually pretty close for the first two periods, with Seattle only jumping out ahead in the last 10 minutes or so. For a team that’s beaten the Winterhawks every time they’ve met them this year, it was less obvious they’d win this time.

I’ve also found my WHL level Dude of Awesome, who I first noticed because he looks like the bad lovechild of Oskar Osala and Colby Armstrong. 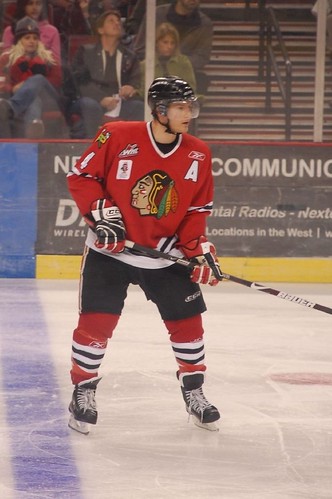 Ol’ Kerr there got into a fight right at the beginning of the second period, won, then got up, ripped his helmet off, and came screaming over to the Hawks bench in effort to motivate the rest of the team before being thrown in the box.

For someone like me, that was love at first sight. Welcome to the THTM Harem, Ryan.
Comment