This is going to be a cop out post as I just edited 400 some pictures from tonight’s game and I’m rather braindead. In bullet points:

* I really REALLY like Varlamov. This is the first game I got to watch him play (srsly, I thought he was made of styrofoam for a long time) and I’m pretty goshdarn sold on the kid. He really ultimately won me over by being an obnoxious little bastard-every time someone was within his blue paint, he was whacking them in the legs with his stick. Somehow I could see him really milking the “I don’t speak English” thing even after he figures out what’s going on. There were also a few really nice saves from him, including the over backwards fumble catch block thingum. His ready stance seems REALLY compact to me… is that a product of a Russian system, or am I just too used to seeing 6′3″ of Machesney in the goal? 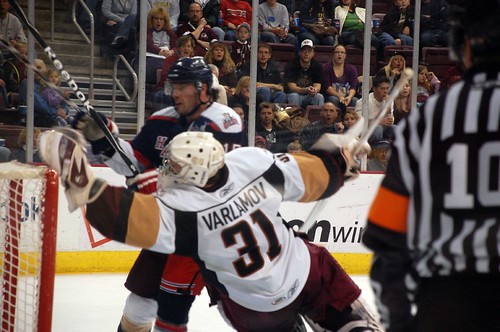 *Josh Godfrey is a beast. He took a hip check directly into the head, went down, blinked a few times and shook his head, got up, retrieved the puck and kept skating. Beast, I tell you. 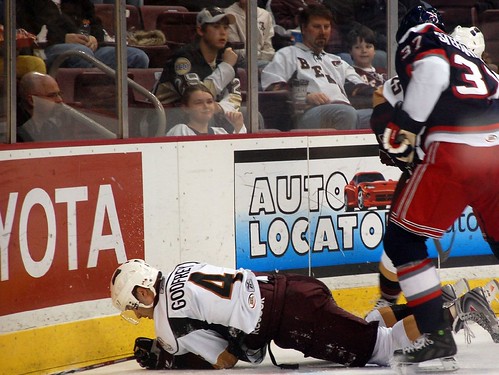 *Johann Kroll is another n00b I’m a fan of. He isn’t a big player, but he’s not yet showed me any reason not to trust him. Unlike a few… um… callups.

*Patrick McNeill seemed to have a really good game tonight, but I’m not sure whether to attribute that to him finally getting himself together, or him being comparatively, one of the better players out there at this point. 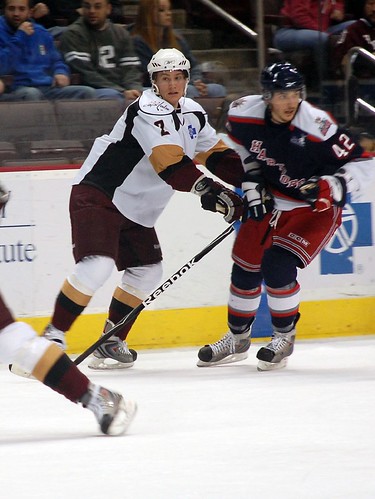 *Oskar Osala and Andrew Gordon were both little (okay, big, in O’s case) wrecking balls out there-I saw each of them land a few crunching hits, and I think O even got the “Crunch of the Game”

*Did you know Taylor Pyatt’s little brother Tom plays for the Wolfpack? Yeah, neither did I until I came up with a picture of a player named Pyatt in the lineup.

*Eric Fehr also is reported to have bunged up his shoulder in the Caps game tonight… shall we start the pool on which Bear goes up next? My money’s on Bourque, Mink, Gordon or Osala. (I still hold that if they think it’s short term O should go, just so he gets a taste of what he has to get to…. and it might give other AHL teams a false sense of security if the third highest goal scorer in the league isn’t there.)