According to Tarik, at least part of the Capitals Infirmary skated practice thismorning, so the Bears may be in luck as far as getting some of their personnel back soon. Of course, this begs the question, do we want them? If a team can pull 11 straight wins out of nowhere while being picked off one by one, do we dare tamper with that?

I see two potential theories:
One, the Bears realized that if they didn’t do something, all these callups could cripple their chances later on down the line and decided to dig deep and play as a team. I wouldn’t be horribly surprised to learn that if this was the case, Amadio had kicked some verbal butt in the locker room, because he seems like the outspoken leader a lot of the time. I’m a little amazed that nobody could figure out how to do this last year, but I’m not going to look a gift streak in the mouth.

Two, all of the callups the BEARS made have realized that this is their One Big Chance and are playing on adrenaline and a desire to stay in Hershey to get noticed a little longer. This somehow seems more likely, but it doesn’t really explain how all of a sudden everyone remembered that this was a team sport and not just six guys on ice hacking at a rubber thing. I will, though, say, that Kroll has made quite a case to be here next year if not sooner, while Pokulok… is… still playing like Pokulok.

I don’t think the addition of Sami Lepisto back into play can hurt, as our defensive corps could use a few more bodies. Supposedly Beagle and Deano both skated at practice today, but neither them nor Godfrey will be making the big Texas trip due to injury. (as per Walton) Daren Reid was playing over the weekend, so he’s back on ice for now at least, and I haven’t heard what’s up with GMac lately, but he’s been a fixture up in Scratch Alley for the last few weeks.

And for your daily dose of player!squee, 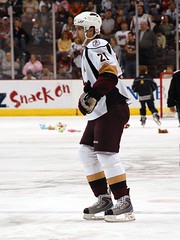 Mink’s pretty darn happy with 11 in a row too.
Comment