In case you’ve been living under a rock, welcome to the Week of the Caps Org Goalie.

To start it off, we had the Great Theodore Crumble on ‘08, in which Brent Johnson got hurt and Jose Theodore suddenly decided he was having sympathy pains or something.

This lead to the Neuvrith Media Leak, in which Michael Neuvrith was either actually called up from South Carolina, or a group of reporters sure thought he had been, as for a while he was reported as being on his way to DC. Of course, as John Walton explained on The Old Barn Hockey Show, Neuvrith was actually in Florida with the Stingrays.

Quickly on the heels of the Neuvrith Media Leak came the Varlamov Insta-Flight,in which Simeon Varlamov was called up to the Caps, (warned by Ovie before Coach Woods even got the call) yanked off the bus in Nowhere Texas, thrown into the rental car the trainers were trailing the team in, and sent off to Bush Airport in Houston in attempt to make a 7:00 puck drop in DC. His gear, as we hear now, met him at the airport.

Unbeknownst to anyone else, while Varlamov was being chucked around with his luggage, the Great “Stretch” Human Interest story was also taken place, involving one Brett Leonhardt, web producer for the Caps and goalie fill-in extroardinaire. For those of you who totally missed it, Leonhardt played Division III college hockey as a goalie, and was asked by George McPhee to benchwarm until Varlamov got there, just on the off chance that something went horribly horribly wrong. 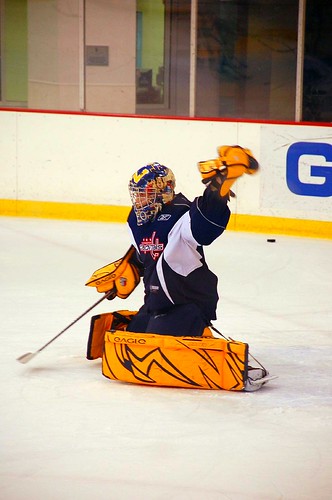 In the words of Sergei Federov, “Only this team. Only the Caps.”

On the other side of things, Bobby Goepfert is back up with the Bears (welcome back, Bobby, glad to see you again) and has been posting some pretty good numbers down in SC. (6 wins, 1 loss, 2 shutouts) Here’s hoping he can keep that streak going here. (I promise we won’t put you in pink again, Bobby… Uh, sorry.) 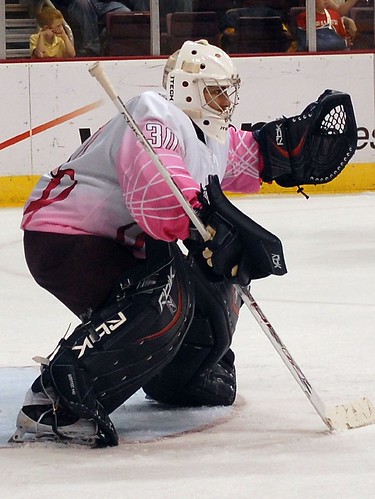 Daren Machesney also just got the invite to go to the Spengler Cup as one of Team Canada’s goalies in January, so a big congrats to Cheez as well.

And before I forget it, go
( I’m endorsing CAN:Gordon, Alzner, Machesney, WLD:Osala, Lepisto, Varlamov)
As Walton explained, if the Bears stay on their current winning streak, there’s also a good chance Woods and French could be coaching at the All-Star as well, so vote early, vote often, and get your tickets soon!