Just a quick note to everyone at the Caps game tonight versus the Lightning.

Thank you for being classy. I know I’m not really in a position to thank you, but thank you anyway. I’ve been at games before where an injured player from an opposing team got booed off the ice, and I just have to say that it felt good to be in an arena that went quiet when faced with injury and then applauded the fallen hero as he went off. Thanks, DC, for being an arena of grownups and not narrow minded children. Classy team, classy fans, and we won’t name any names as to which bright orange team could serve to learn something from y’all.

For those of you who didn’t hear, Jamie Heward took an Ovechkin hit in the beginning of the third period, and is reported to have a concussion. He wasn’t originally conscious or moving, but as Tarik reports, by the time they got him on the stretcher and started wheeling him off, his eyes were open and we could see the coaches and trainers talking to him. He’s reported to be going into the hospital for further examination.

Update: News is that Heward has full motion in his limbs before going to the hospital, but they’re taking him anyway.

Update 1/2: Heward is on his way home to Tampa, released from the hospital and cleared to fly.

(In my opinion, and the hit happened right in front of me, cross-ice, it was a good hit-legal and not maliciously intended. If anything, it seemed to me that Heward had his head up almost until the moment of impact, and it didn’t seem like Ovie took a run at him at all… I expected Heward to go to his knees and pop back up, and it was really only the lifeguard sixth sense that made me keep watching him all the way through the crumble onto the ice. But anyway, IMHO, legal hit, honest accident, Ovie shouldn’t be penalized.)

For happier news, Sean Collins potted his first NHL goal tonight, and scored the first Caps goal of 2009. I had put my money on Bourque doing it just to spite me, so I was happy to see that at least I was right about it being a Bear. 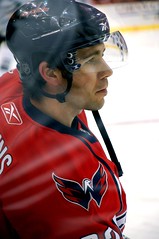 Chris Clark also scrambled one in somewhere in the 8 point mess for his first of the season, as well as having a knock down fight complete with bloody forehead against the Lightning’s Hall.

And almost conclusively, we believe that Chris Bourque (reported at 5′8′) is actually TALLER than Martin St. Louis (reported at 5′9″). After a couple faceoffs and a few skatebys, St. Louis appears to be the… uh… lesser of the two. 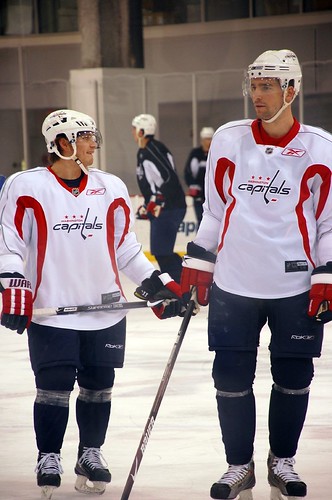 Finally, for those in Hershey starting to despair, Tyler Sloan is back to join the team in New England (I watched Boudreau can him nicely thismorning at practice) and Alzner, Bourque, Giroux and Collins are being taken care of- fed and watered regularly, as you can see in the pictures.

(and for the sci fi nerds, Chris Bourque, Child of Dune, obviously a spicer.)