Philly Phantoms forward Garrett Klotz was taken off the ice on a stretcher Jan 24 after a fight versus Manchester Monarch Kevin Westgarth. 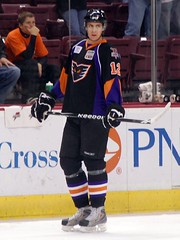 According to cbc.ca news report, Klotz hit the boards awkwardly on the way down with his head and seemed to suffer a seizure on the ice. He was taken to the hospital, and the word now is that he’s responding to doctors, his face was a little beat up, but overall he’s doing fine and even watched the game finish on the TV in the hospital.

TSN.ca has a video of it up, if you want to see the extent of the injury. It’s not as graphic as the Cherepanov video, but it’s still not horribly pleasant.

Glad to hear he’s doing okay, and hopes for a fast return.