Revenge of the Nobody Goalies
February 6, 2009 | Filed in: Uncategorized

It’s funny when all of a sudden things converge in a random spot and you’re left scratching your head and saying “Whoa…. this is a little surreal.”

Kris Mayotte, the fresh meat goalie for the Bears, called in to cover Machesney’s butt until Varley gets better, was a training camp invite with the Washington Capitals two years ago…. when Machesney was hurt. He didn’t get out of camp, and went straight to the ECHL’s Reading Royals, who handed him over to the now defunct Fresno Falcons because they had too many goalies. 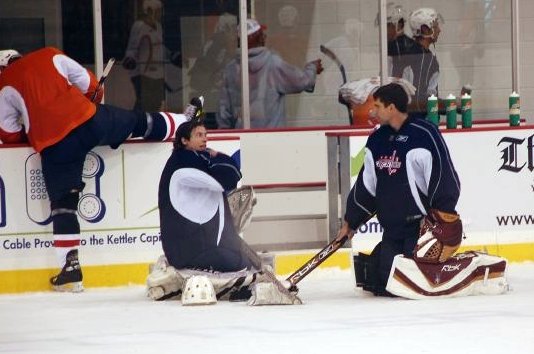 Too many goalies, two of who I believe got invited to camp with the Bears that same year…. those two being local boy Jeff Pietrasiak and, drumroll please……

Jonathan Quick, the goalie for the Kings, who just managed to stuff the Caps 5-4

Funny how it all comes back around, eh?