Just when you thought the Caps were done with their incessant plundering of the Bears, the team’s inability to stay in one piece rears its’ ugly head again.

Likely to be in the game tonight versus the Lightning?
A freshly called up (and healed) Quintin Laing, just back from a knee injury, possibly taking Boyd Gordon’s place.
Okay, I lied, they sent him home as I was writing this.
And if you want to get pedantic, Pothier’s not *really* a callup, but if he’s taking Erskine’s place, I’m willing to call him whatever he wants to be called…. in a non-kinky way, of course. 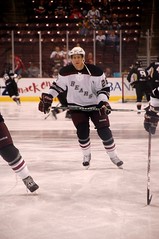 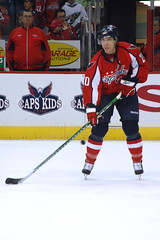 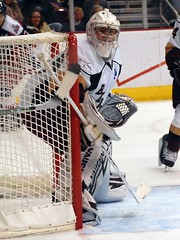 Of course, you can’t forget Varlamov either, slated to start tonight.

With the exception of the Atlanta game, the Caps seemed to pull themselves back together after hitting the callup skids again, which makes me wonder if they need that edge of n00bness in the lines somewhere to get everyone playing again. Is it the X factor in the new guys they’re not used to? Is it the sudden realization that the upstart kids (or Helmer) could swoop in and take their jobs out of camp next year? Is it a need to cover the newbie’s position because they perceive them as a lesser part of the team, and as such, needing extra help…. which of course, backfires when the callups can take care of themselves and manifests as that much extra boost to the entire team?

My guess is that the people who refute chemistry would be the same ones to refute a callup making an integral difference in the team, but I don’t think it can be argued with quite as much vehemence as anyone’d like.