*Chris Bourque, Steve Pinizzotto and Daren Machesney back to the good ‘ol Chocolatetown. Simeon Varlamov goes back south as a replacement. Fans confused, after hoping to see Varley play.

*Caps lose to Leafs last night. Bears hope to NOT repeat the phenomenon when meeting the Marlies tonight

*Bears can clinch a playoff spot tonight with a win against the Marlies, but the BSens must beat Philly as well for it to happen. If there was ever a good time to send the Phantoms your bad karma, now’d be one of ‘em.

*Goalie flipouts, freakin’ love them. On top of Tuukka Rask’s game misconduct AHL flipout at the Dunk, Martin Gerber was suspended for three games after physically assaulting a ref by shoving him in displeasure.

*Although I also love the way Laich just kinda pokes the entire goalie/puck combo back into the net.

*Aaaaand finally, in that game, I felt exceedingly bad for Daren Machesney, who was kept from doing his typical leaning over the boards schtick by the architects at the Air Canada Center, who rudely put a piece of plexi in front of him. Sorry, Cheez! 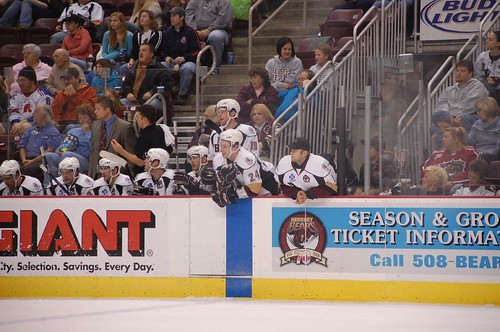 Happy late birthday to Neuvy, and happy early birthday to my co-conspirator at Caps In Pictures

In a personal note, I was named one of Eklund’s Ultimate and Best Hockey People On Twitter as of the 24th. I’m not sure how I got the distinction, because quite a few of my twits are things like “Just started trying to re-write ‘Bourque In The Harbour’ in my head. Boat/hockey dork FTW,” but I’ll take the publicity where I can get it. Especially because I just twittered today, “Obviously, if the Penguins have The Penguins Show with Alyonka, the Caps should have The Caps Show with Teka. I could take her.” If the Bears are interested, though, I’m sure something could be worked out there as well. If you’d like to follow me on Twitter, I’m sweetestofdekes Points to anyone who gets the reference.