Spent the weekend in Hershey watching some hockey for Easter, or as we call it around these parts Zombie Jesus Day.

As they’re cracking down on people with big cameras at Giant Center, I couldn’t get the Stalkercam8000 in, so you’ll have to settle for a collection of crappy warmup videos from Sunday courtesy of my ancient point and shoot.

Notes from Saturday v. the Phantoms:

*Kyle Wilson is, I’m convinced, one of the most underrated Bears on the team. He had the first two goals of the game and I don’t quite understand why DC never actually called him up in that glut of callups, if only to see what he could do. And before you go there, yes, he is actually Caps property.

*Nice time for Staffan Kronwall to pound in a second goal as a Bear. He got the gamewinner over Philly.

*Excitement of the night was the return of Graham Mink to the lineup, who’d been out with a banged up wrist. He didn’t have any real stand out moments, but he looked solid. Good to have you back for the run, Minker.

*On that note, the two penalties of the night for Unsportsmanlike Conduct went to Mink and Giroux, Giroux’s with the note “Disputing Decision.” While not out of character, still a little amazing, as I wouldn’t have pegged either of them as being the two Most Likely To Argue A Call.

*Kip Brennan was in fine form, dropping the gloves and handily winning over Garrett Klotz. I’m okay with him sticking around next year-he’s like Robitaille without the turtle, and I’ve always had a soft spot for effective instigators who can back their mouth up. (Jarkko Ruutuu, anyone?)

*Tyler Sloan boarded himself late in the second period trying to take out one of the Phantoms and went down pretty hard. He didn’t play the rest of the game or the game Sunday, but wasn’t visibly hurt during the jersey auction Sunday. There’s also the news that Tom Poti’s groin is acting up again in DC, and as Sloaner’s the usual callup for Poti, well, you extrapolate from there.

*Went upstairs and networked with the Dog Pound guys… there’s a deviant plot in the works to franchise the Pound to DC if and when Beagle makes the big team.

*Spotted Sami Lepisto in the players’ box. Sadly, he was looking awfully pale and disappeared partway through the game, and I hear he went to the hospital that night and then wasn’t around at all Sunday. Get well, Sami!

Sunday’s game v. the WBS Penguins was, until the bitter end of it, a pretty awesome game. The Bears answered all of the goals one-for-one in the first half, and Cheez seemed to be on top of his game moreso than the last time I saw him.

*Congrats to Giroux for making 60 on the season. Take that, Mike Green

*This was also Joe Finley’s first game, in which he dropped ‘em against Paul Bissonette. Didn’t have the win, but seeing a guy that huge throwing the fists is always a little inspiring. Finley was obviously a little nervous about the game, as he was hanging back quite a bit, but I could see him being pretty darned good given some time to adjust.

*Big O seemed more willing to throw himself around than I’d seen him be before. I don’t know whether this is because of the influence of Finley or whether he’s just realizing that he can and should do it, as a bigger guy.

*For part of this game, the Rookie Line was back together, with Bouchard, Perrault and Osala.

*I actually really like the Deano/Alzner pairing on defense. Deano’s not really the Mike Green/Sami Lepisto type, but he’s still more willing than Karl to go out and create plays, and with his extra grit, it’s not a D-line *I’d* love to come up against over and over.

*Return of Keith Aucoin, anyone? He was all over the place Sunday, but I couldn’t figure out whether it was the sudden level of play change, whether he was just exhausted from playing the night before in Florida, or what was up. There were definitely moments in which he all but handed the puck to the Penguins, but there were also brilliant moments of hard work paying off for him too.

*Quintin Laing was obviously favoring his left side during the jersey auction, but he was also sitting on the boards joking with Greg Amadio, so he’s at least in good spirits. Get well soon, Lainger! 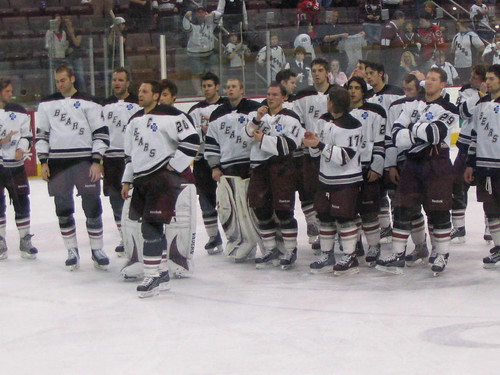 Thanks for a great season, guys!
(Also, enjoy an article on Andrew Gordon)
2 Comments