Otherwise titled: What Your Cell Phone Says About You.

It came to my attention during the Hershey home closer that every freakin’ one of the guys was either talking about food (lookin’ at you, Greg Amadio) or futzing with their cell phones. To that end, I give you the Truths Your Cell Phone Tells: 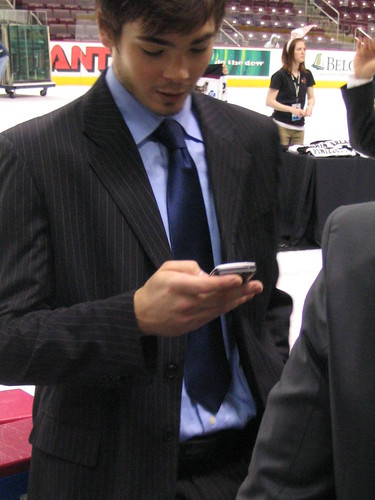 Neuvy is the proud owner of what looks like a nice silvery shiny new Blackberry of some ilk. Obviously, our star goalie is a man of the times, a true get up and go-er who wants to be on top of things all the time, whether it’s by text message, Facebook, or… horror of horrors, maybe Neuvy has a SECRET TWITTER ACCOUNT that nobody knows about. @blankczech? @neuvy30? @thenextvarlamov? Of course, there’s also always the chance that after spending some time in DC he realized that what he really wanted to be was a Hill staffer… 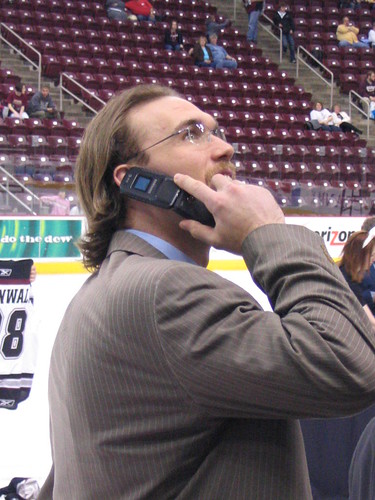 Minker, on the other hand, takes substance over style. He rocks the Samsung Rugby, a built-to-military-specifications-phone claimed to be impervious to “shock, vibration, rain, humidity, solar radiation, altitude, and temperature extremes.” Just like Minker himself. I wonder if he’s figured out how to integrate it into any part of his chest padding yet? Or better yet, he could start taping phones to himself Hanson-brother style before every game. I can see it now.
What’re you doing, Mink?
Puttin’ on the phones, coach! 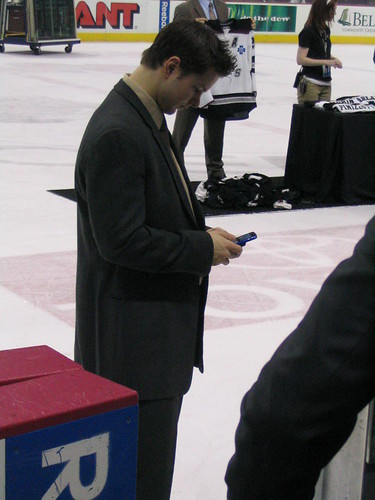 Gordo’s completely engrossed in the bright freaking blue Verizon Blitz. Obviously, Gordo is practicing for the next World Texting Championships in his downtime, looking for the ultimate in style over substance. In this case, we’ve almost got a “dogs always look like their owners” phenomenon going on, little, compact, brightly colored, full-featured and c’mon, with a name like the Blitz, it’s gotta be fast moving and on the cutting edge, right?

Well, at least until other people realize that it’s kind of a girly little phone.

And with that, we come down to the last of the Bears’ Texting in Public Special Team. 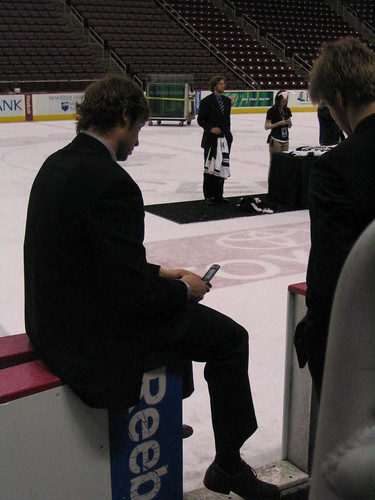 After much squinting and Googling, Beags wields what seems to be one of the small, chunky Motorolas, making him and I phone-buddies. Obviously, Beagle is the captain of Team Texting In Public, due in no small part to his proficiency on a *gasp* STANDARD PHONE KEYBOARD and not a full-Querty setup. To your traditional ways, Captain Text Team, we salute you. You’re either a staunch traditionalist, a cheapskate, or you just can’t be bothered to wrap that much of your personality up in your phone. You are, my friend, a Real American Hero. Even though you’re Canadian. (Insert bad beer ad music here.)
1 Comment