On what little corner of God’s green earth is this an acceptable splash page for a sports team? 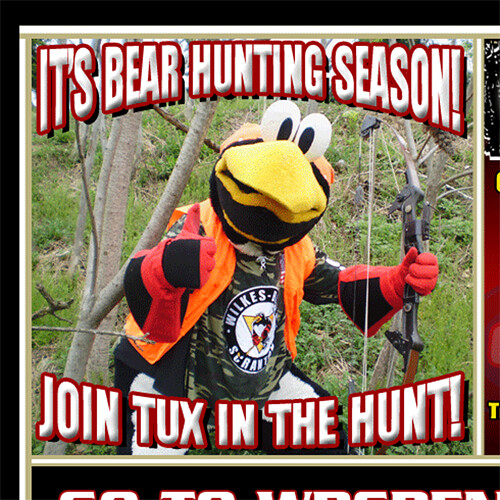 I understand it’s a rivalry. A big rivalry. Trust me, I’ve been in the stands at the Giant Center for other WBS games, and it’s…. intense. I was there through the first round of playoffs last year when the Bears couldn’t push it any further. I understand that sometimes mascots do things to get the fans riled up for their team.

But this, in my opinion, is crossing the line.

I can deal with Coco batting around a stuffed Tux with his hockey stick, because to me somehow, that’s different. Although Tux is played by a person in a penguin suit, the suit itself and the team it represents is really what’s being whacked at, and if a stuffed whacking is all he gets, so be it. I object, generally, to stuffed mascots being hung from nooses, on the principle that that’s really just toeing the line of what’s acceptable in PUBLIC, at a hockey game or not.

But by duding Tux up in a hunting outfit and GIVING HIM A WEAPON under the headline “It’s Bear Hunting Season! Join Tux in the Hunt!” we’ve reached a whole new level of uncomfortable. Because “The Bears” or “Bears” is the language used to refer to the players themselves, this feels ominously (to me at least,) like Tux is promoting the acceptability of physically hurting players, whether it’s off the ice with bows and arrows, or on the ice with questionably clean plays. It may also only be me, but whenever you throw the word “hunting” into the hockey context, I also immediately think of “headhunting,” which you may or may not already know as the term used to refer to a player who seeks out and delivers questionably legal head-hits.

Sure, central PA’s a big hunting area, and sure, this is a big rivalry, but some part of me just questions the intelligence behind this campaign. I don’t want to get into the “my team, your team, who’s classier” debate, but I doubt the Bears would ever let a promotion like that be released through the team itself. If it grew out of the fans, they might allow it, but that would never be specifically promoted. I’m also very doubtful that ANYTHING like this would have come out of an NHL team either, and I’ve seen some preeeeeety awful Flyers marketing in the past, what with that whole “Broad Street Bullies” persona.