My weeks lately have consisted of being up at 5:50 AM, working until 4:30, getting home via ridiculous public transit at 5:30, going to rehearsals (I’m assistant stage managing a show) at 7, and getting home around 11pm to crash and do it all again the next day. It’s a good thing there hasn’t been much hockey, because I wouldn’t have been able to keep up with it anyway.

The latest things I should have reported on, had I found time:

*Development camp ZOMG.
Next week, we start seeing the baby prospects come through Kettler, or as my good friend vulcansmuse on Twitter has hash tagged them, the #kettlerjailbait. She demands pictures.

I’m most interested in seeing who’s still considered development camp fodder. Obviously Holtby and Della Rovere will be here, and I doubt Alzner is still considered a prospect, but what about the guys who played most of the season in Hershey but got called up a few times, like Osala and Beagle and Gordon? They haven’t stuck to the big team yet, but is Beagle really still that developmental if he stuck through part of a Cup playoff run?

On the Development Camp ZOMG front, I’m also going to see if I can shoehorn myself in as media to interview some of the potential Bears for next year, so if you have a question you’re dying to ask one of the n00bs, drop me a line.

*Juice for Arbitration.
Either ShaMo realized that if he arbitrated he’d be a goner, or he’s satisfied with what he’s getting, but either way the only Cap that came up for arbitration is Milan Jurcina, the second lowest paid d-man with the team. My gut feeling says we meet his request and he stays, but I’m not going to promise the gut feeling is anything more than the Ethiopian I had for dinner. Either way, if Alzner is going to come up and stay, there needs to be some space made on the blueline for him…..or Schultz is gonna go back down to Hershey and fight with Finley to be Tallest Dude On The Team next year.

So yeah. Still no word on whether or not Joudrey’s a confirmed Bear again for next year, or whether Fehr will be sticking around (although I’m willing to glue his feet to something so he can’t leave, after I never got to wear my Fehr jersey to a game), or even what’s going to happen with our backlog of goalies, but I can promise you this…. for the Tuesday of development camp, I will be reporting via Twitter directly from Kettler. With the Stalkercam 800000.

And just for good measure, have the coolest picture I took from development camp last year. 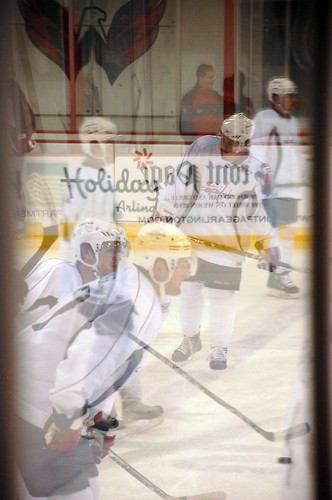