Oh, Hershey. You’re my team, guys, but you make such bad fashion choices once in a while.

The various charity jerseys, okay, I can more or less give them a pass because the money goes back into the community, but even you have to admit that some of those hurt worse than others.

But your new permanent jerseys?

I can’t pinpoint what it is I don’t like about the normal home and away. I’m not a fan of the fake-lacing necklines on any jersey, and I think that those waist-stripes on the shirt-tail jerseys generally look like you’re skating around with some fashion belt on. And having both a number and a stripe that close together on the arm just never looks that good in my eyes.

Of the three, the third is probably my favorite, but putting someone’s number on their stomach? C’mon. Why?

Honestly, for the simplicity of design alone, I like the old new jerseys better. As the oldest team in the AHL, the Bears can get away with any number of “throwbacky” gimmicks that most other teams couldn’t. The diagonal name, for one: to do that well you either have to be the Rangers, another Original 6, or the oldest team in the AHL. It was nice, it was clean, it had all the colors, it had a ridiculous third….

Historically, the jerseys the Bears have worn have been pretty simple. They really didn’t (and still don’t) need to say much more than “Hershey”.
For example: 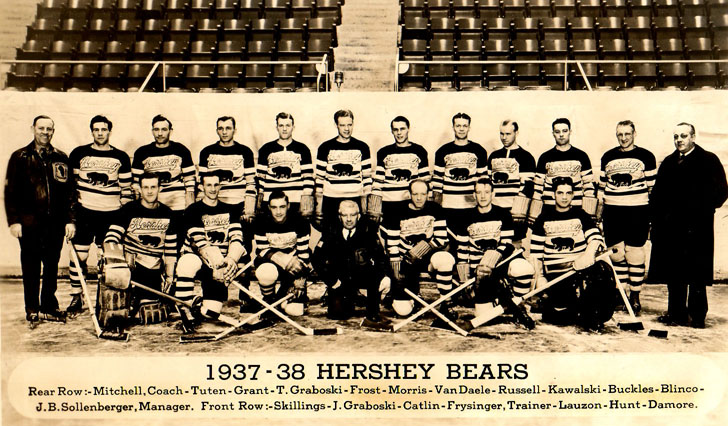 We’ve seen a recent version of this: it was interesting

Number on the stomach, but not tiny!

Frankly, guys, the precedent’s been set for a simple, block color jersey with a text logo, which is not… so much what it is. It’s gonna be a little while before I think I’ve adapted fully, and I definitely will still rock my new-oldschool jersey until it falls apart!

In the words of Tim Gunn, we’re gonna make it work!