*The whole JS Giguere/Jonas Hiller/potential retirement/not wanting to play backup thing seems so so SO VERY POTENTIALLY SIMILAR to what the Capitals went through with Kolzig. With the important distinction that Giggy does have a Stanley Cup. (Yes, I just went there. Sorry, this is not the Kolzig Fangirl Blog. Much like Nylander, I’m taking a firm Great While He Lasted, Really Nice Guy, So Long And Thanks For All The Fish stance.) For the sake of my continuing to like him, I hope he takes a more mature stance on the whole thing at the end of the season than Kolzig did. Yes, I just went there too.

*Speaking of which, Giggy makes 6 million a season. I KNOW that this is stupid to even say, but DAMN MAN, THAT IS LIKE 27 TIMES WHAT I MAKE IN 12 MONTHS. 27. 27 It’s beating a dead horse, it’s pro sports, and it’s not going to change, but there is ABSOLUTELY NO CALL FOR THAT. Bill Gates, I’m looking at you next. Hiller, you invest that 1 million a season wisely, okay man? Because god only knows, you might wreck one of the EIGHT CARS you can afford with that, or need to decorate your PENTHOUSE APARTMENT….. okay, I’m done, I swear. NOT GOING TO CHANGE, ATHLETES GET PAID TOO MUCH. THE END. MY SOUL HURTS. AUGH.

*It’s really against my MO to despise Hello My Name Is Ray Bourque’s Son Chris as much as I do, I have realized, as I fall in love with Vladimir Hello Let Me Flatten You I’m 5″11′ Sobotka and continue to be amused by Andrew Have You Met The Ice It’s Nice This Time Of Year Gordon. Generally I like the little guys who have the balls to run at the Chara-sized dudes, but despite his flooring of aforementioned giant, BourqueBits has just always rubbed me the wrong way. While it’s not a lack of skill (like Pokulok) or a lack of team play (like Motzko), something about him has always just seemed to act entitled somehow-he doesn’t make a big deal out of the connection to his dad, but he also never seems to be embarrassed by it or try to shut it down in any way by saying “I want to be known for me, not as my dad’s son.”
He also never seems to go out of his way to be an awesome person either. Oskar Osala will give kids his sticks, Eric Fehr tosses pucks into the crowd after warmups, most of the guys will be reasonably accommodating if you’re looking for an autograph, but he’s one of the ones that always seems a little annoyed by it, and doesn’t seem to go out of his way to make a fan connection. Change my mind, BabyBourque, I’m open to it at this point.

*As much as Ted keeps saying the Caps are a bargain he has to step back and look at who the fans are and what kind of money they’re making. This is a town of the REALLY WELL OFF and feel-good non-profit workers. While the REALLY WELL OFF CEO’s may be bringing people to the games and filling the lower levels, $44 in the upper bowl is still a heck of a lot for non-profit workers and baby government employees to be shelling out. As a season ticket holder I’d have been looking at $27ish a game, but as a walk in, $44 is a little painful. I don’t want to go for the “hockey fans may not be in high paying jobs” argument, but there is a blue-collar aspect to the game that pervades even in today’s crowds. Pricing the fans out can’t be good for the team….. see part of my growing malaise with the Caps. Squeeze me for money and make the squeeze obvious, and my grudge starts growing.
And, although the 40-something CEOs may be bringing their offspring, the 20-30 somethings in the baby government jobs, non-profits, and other struggly positions are the next future of the fandom. If you lose them by pricing them out, you’re rebuilding the fandom from nothing as the older folks shuffle off. While the Caps have experience rebuilding a fan base, I can’t believe they’d WANT to do it again. Historic memory, organizations can has?

*Oh yeah, and photo sets from the Blue Jackets (damn, Jared Boll is attractive) and (hi, Clowe!) Sharks are up. I had some from the Flyers, but I had found a really wretched piece of glass to shoot through, so 90% of them are just trash. The only one I’m really in love with is one of the ice…. 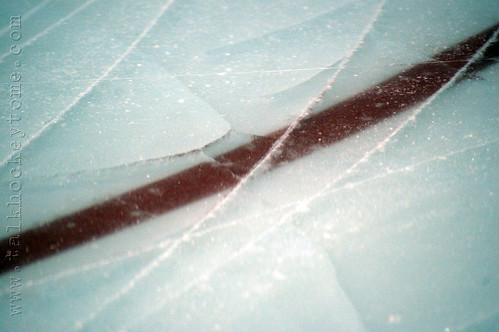 With that, I bid you good night with promises of less bellyaching next time!