Oddly, my favorite muckraking Caps reporter hasn’t spilled the beans on what’s going on with Jose Theodore yet. All we hear is that he left New York for “personal reasons,” has been practicing with the team, and plans to travel to Montreal, but possibly not play. In a nutshell, what the Express said.

So of course, what are we supposed to do but make up wildly inaccurate rumors and spread them on the internet?

Welcome to the Jose Theodore Choose Your Own Headline Adventure:

Here are my top guesses.

Something is wrong with his junk. Yeeeeeeeah, that junk. I don’t think it’s a physical injury, because they’d claim he had a groin pull, but on something a little more nasty. My money’s on wife-enforced chastity device/castration or STD, frankly.

Speaking of nasty…….I take that back. All of my money’s on STD. *shudder*

He’s having brain/vision/headache/concussion issues and is afraid to play Montreal at home on the off chance that they wear the barberpoles.

And they’re even worse in motion. Can you blame him? Those give me a headache and I’m not trying to track a little black thing against them.

In trying to recreate his most memorable moment ever from the Winter Classic, he actually frostbit the inside of his lungs and is now trying to recover. Really, he was only doing it to try to keep up with Quintin Laing on the Bizarre Injury List. 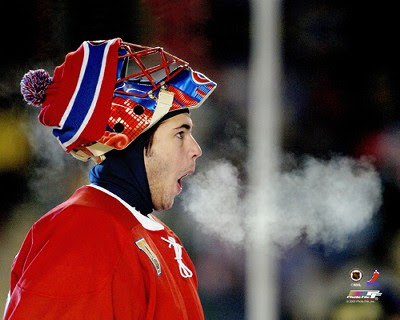 The 80’s called. They wanted his pants back. Oh, and his hair. And the backdrop.

The 80’s only take hand-delivered goods, and when the 80’s want something, YOU’D BETTER BE THERE OR BE SQUARE.

Sadly, Jose’s emo-hipster-bastard-band Butterfly60 double booked themselves throughout this weekend, thinking he’d give Varly the start, and without their vocal stylings of their leader, they were afraid they might lose two of their three fans.

Jose couldn’t do that to his fans. He had to come home and play.

—————————————-
Ayyyyy. Welcome to House of Theo. I’m Jose, your on-call pimp. Need some dudes in bad shirts pimped on a Saturday night? Babay, I drop everything I’m doing to come pimp your badly attired men. 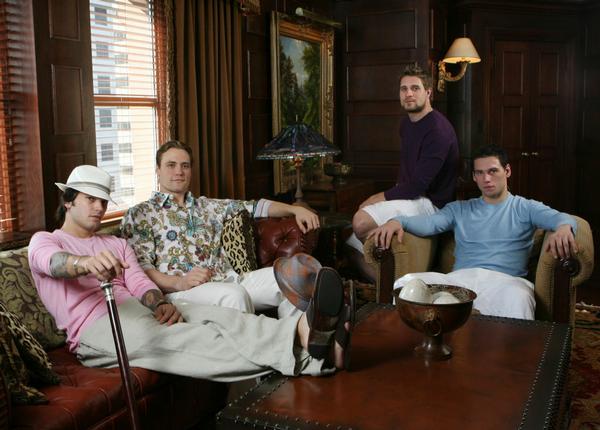 Not cheap, you hear. Not cheap. Daddy needs a new catching glove.

Saturday night you say? Saturday? Hmm, well, I’m supposed to be playin’ the net Saturday (if you know what I mean), but for you? For you, babay, I see what I can do. Jose’s gotcha.
Obviously, Jose’s Rent-A-Dude has taken off more than he thought it would. Sometimes, the business, it just has to come first!

The last and final idea as for why good ‘ol Theo’s gone missing:

Varly got wind of his previous choice in women and beat him soundly around the ears, leaving that awkward ringing sound that sounds a little too much like a goal horn to be really GOOD for a goalie’s style of play.

Never fear, he’s undergoing electroshock therapy at Chez Semyon to get him more interested in vapid skinny chicks, and he should be back soon.

Even though I shouldn’t have to do this, it’s a JOKE, people. I have no idea what’s actually wrong with Theo, whether it’s mental, physical, spiritual, animal, whatever. Obviously, I hope it’s minor and he gets better soon, but really, when nobody tells us anything concrete, we can’t help but speculate